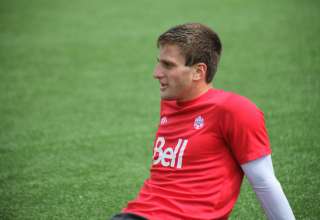 Daniel Haber was one of 11 Canadian men’s national team members to step on the pitch at Edmonton’s Commonwealth Fieldhouse Thursday afternoon. He was added to the roster after defender Nana Attakora was ruled out with a concussion.

After scoring two goals in just 81 minutes of action late in the Israeli League season, Haber’s contract term with Maccabi Haifa expired. He is now exploring his options, and he knows that a national-team cap will help his prospects. The Toronto native was a scoring sensation at Cornell University, but skipped his final year of collegiate play so he could pursue his dream of wearing Haifa’s green strip.

“He was lively today, he scored a couple of good goals in the session,” said national team coach Colin Miller. “In fact, the whole group was lively. It was very good today.”

Haber spoke to The 11 about getting his first national-team callup, and his prospects for the future.

Q: How surprised were you to get the national=team callup?

A: I was actually very surprised, I had just gotten home (Toronto) a couple of days earlier. It’s always been a dream of mine, to play for the national team. I didn’t know I was quite this close, but it’s a real honour to be here.

Q: Did you sense that the Canadian team might be tracking you?

A: To be honest, I wasn’t really thinking about it. I didn’t think that I was on their radar yet. The guys out here are mostly proven and I was just focused on getting my own career off to a good start.

A: Well my contract with Maccabi Haifa is finished and I am currently in talks with them and my agent is looking around elsewhere. I’m not sure what the situation is yet.

Q: Would you look at MLS?

A: Potentially, but my agent and I have discussed it and there are some other opportunities out there that we’re going to look into, for sure.

Q: You made the most of your time on the pitch, two goals in 81 minutes…

A: Absolutely. As a footballer you have to prove yourself every day. But it was a tough few months, I was working my way in, the team was doing well and I was just staying hungry waiting for my opportunity. I knew once it came, I was going to have to make the most of it. There was going to be no excuses, and I was really happy with the way I played, and I guess it’s opening the door to some big things.

Q: Is your preference to go to back to Haifa?

A: Maybe. I’m not sure, really. If there are some other teams out there where I feel I can get some consistent playing time then that would be very interesting, as well. I liked it at Maccabi Haifa, they treated me well, but it’s a big club and it would be very tough to get big-time starter minutes right now.

Q: A good game Tuesday helps you in the quest to get a job…

A: Absolutely. One thing I’ve noticed overseas and in Israel especially with the two or three big clubs is that the players are all very experienced, in their late 20s or play for their national teams. Getting a Canadian cap would be a boost for my career and help me in my quest to get a job.