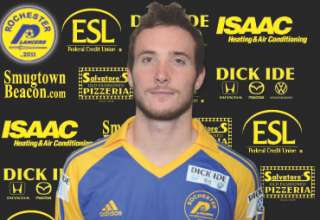 Paul Craig is a rookie all over again.

The Prince Edward Islander was one of many players cut by FC Edmonton at the end of the team’s 2012 campaign, after it finished at the bottom of the NASL standings. And even though Craig — who scored the final FCE goal of the season in a rousing last-gasp 2-2 comeback draw with Fort Lauderdale — was a fan favourite, he was on the way out.

But Craig didn’t remain unemployed for very long. Despite having no real experience in the indoor game, he went down to Western New York for a trial with the Rochester Lancers of the USL-owned Major Indoor Soccer League, and earned himself a one-year deal.

Now, Craig is learning a new game, taking the skills and experience from a solid CIS career and two years of life in the NASL , and applying it to the indoor game. And he’s still trying to wrap his head around some of the rules, formations and strategies that come with the MISL.

“Obviously, the field is ridiculously small,” said Craig. “So I am learning how to move and different offensive plays. But I am loving it. I’m learning a lot. When you have Doug Miller and Mauricio Salles, they are unbelievable players, and you learn a lot from them.”

Miller, one of the best indoor players America has produced, came out of retirement to play for the Lancers when the team was launched in 2011. In 2010, Salles was named one of the USL’s Top 25 players of the decade.

And Craig is hoping that playing for the Lancers can help him attract trials in the spring. He doesn’t gave anything firm at this moment; but both Miller and Salles juggled indoor and outdoor obligations through their careers. And former Eddie Daniel Antoniuk, who won the Soccer Bowl with the Tampa Bay Rowdies this past season, is also regarded as one of indoor soccer’s best players – a star for the PASL’s Cadillac franchise, the San Diego Sockers.

Two games ago, Craig scored his first MISL goal, against Syracuse. He was on as a sixth attacker as the Lancers tried to come from behind. He said the goal was a case of “being at the right place at the right time,” but it wasn’t enough for the Lancers, who dropped a 16-14 decision. Craig also scored in Rochester’s most recent game, a two-point goal in a 14-12 loss to the Milwaukee Wave.

Two goals in two games — it looks as if Craig is learning this indoor game.

“I’m a rookie here, so I am not going to play too much. But I am learning every day, and keeping myself in shape. I’m working a lot on one v. one defending and attacking, skills that I also need for the outdoor game.”

As for being released by the Eddies, Craig is disappointed — but isn’t bitter. He understands that pro soccer is a business, and he looks back fondly at the two years he spent in the Alberta capital.

“I can’t complain. I got to spend two years playing in Canada, as a Canadian. I felt that I was representing Canada, representing Prince Edward Island, whenever I played. We didn’t have a lot of fans, but the ones we had were very loyal and passionate. And I appreciated them.

“It was disappointing, but it wasn’t a surprise. I wasn’t playing a lot. And, when I was playing, I was coming in as a sub. And even though I was scoring when I did come in, it was clear that they didn’t feel like I was a player who could play a full 90 for them.”

But Craig, who won fans with his tenacity and never-say-die attitude on the field, isn’t close to giving up on his soccer career. The MISL doesn’t have a lot of Canadian content, so Craig’s presence may make the Lancers the unofficial recipient of the “Canada’s team” badge.