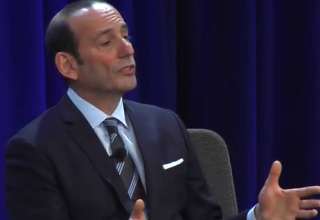 It was you, the readers of Plastic Pitch, who spurred this special theme issue of the magazine to life.

How? We looked back at the readership numbers for our first four issues. Issue 2, which featured our 16-page look at Canada’s bid for the 2026 World Cup, was our most popular. So, Capitalism 101 tells us to give you another theme issue. What you’ll find in Issue 5 is a collection of stories and essays that, hopefully, will get you thinking critically about the pyramid that we share with the United States.

This issue isn’t meant to be anti- American, anti-MLS, anti-NASL or anti-NWSL. It simply asks our readers to consider if we need to change our relationship with our neighbours, or if we possibly need to politely tell them that, thanks, but it’s time for us to be on our way.

One bone on which to chew: In December, MLS Commissioner Don Garber reaffirmed his position that Canadians could not be treated as domestic players on American teams because of U.S. labour law (even though this position has been refuted by the U.S. government department in charge of labour equality). Then he said that he hoped to see a day when only Canadians could be domestics on Canadian teams.

So, there was an admission there that the current rules, which allow Canadian teams to count American players as domestics, but not vice versa, aren’t ideal.

Yet, without hard deadlines, Garber’s recent statements come off like yet more empty promises from MLS headquarters.

Right now, the way the Americans see us is sorta like how the Hitchhikers Guide to the Galaxy saw Earth.

With Canadian teams in Major League Soccer, the North American Soccer League and USL-PRO, our pyramid is married to the American system. And, the Canadian Soccer Association foots the bill for 16 of our players to be employed in the NWSL.

But, there’s a problem here. With the Americans calling all the shots when it comes to our development, the “we’re not good enough” excuse becomes a self-fulfilling prophecy. Our players don’t play much in MLS; the commissioner of the league tells is that the roster rules will become more favourable when Canada produces more players. But, the current system doesn’t encourage this country to produce the best players it can, when Americans can be signed as domestics by the Canadian clubs. Sure, you can develop academy players as a decent public-relations exercise but, for the practical purposes of playing MLS games, it’s easier to find a bunch of American players to fill the gaps.

So, under the current system, our players will never be good enough.

In order for our teams to produce more players, the rules have to change… first.

Garber should set a deadline. Put it in the rulebook that, by 2018 or 2019, Americans will no longer be domestics on Canadian teams. It gives these teams time to prepare and not compromise any current contracts.

And, it lights the fire under our butts that we need to fix the system. Deadlines, not promises, spur people to action. And, if MLS changes the rules, then NASL will follow suit (USL-PRO already sees Canadians as domestics across the board, so no issue there).

Sure, you can argue that forcing the Canadian teams to treat Americans as imports by 2018 or 2019 would put them at a competitive disadvantage. And it would be an argument that would hold water if any of the three Canadian clubs were any good.

But, under the current rules, they have zero playoff wins between them. The competitive advantage argument is false.

And, one thing that sets soccer apart is the fact that most teams around the world have philosophies that they try to live by.

A lot of clubs work hard to develop local players and strengthen ties to their communities.

We need to challenge ourselves to be better. And, every time Canadians have to hear the “we’re not good enough” argument, we need to respond with “yet.”