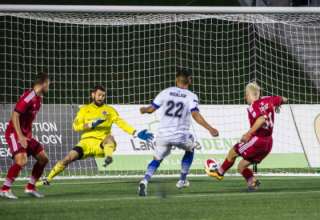 At the midway point of the first half, things looked bleak for FC Edmonton. The Eddies were down two goals on the road to Ottawa.

By the end of Friday’s game, it was the Ottawa Fury who was holding on for the point.

The Fury’s 2-0 lead evaporated thanks to two goals from Eddies’ forward Daryl Fordyce — and it took a last-second goal-line clearance from Ottawa’s Rafael Alves to preserve the 2-2 tie.

“Some teams would come in here, go down two goals, and then throw in the towel,” said Eddies’ coach Colin Miller. “But it’s not in our DNA.”

It was a wild and woolly affair from two of the top defensive teams in the league. At halftime, Miller said: “It could be 6-6 right here at the moment the way both teams are defending.”

The Eddies gave the home side an absolute gift just after the opening kickoff. In his own box, FCE centre back Pape Diakite whiffed on a pass, leaving it for Ottawa striker Thomas Stewart to knock it into the net. Stewart’s never going to have an easier goal to score than that one.

“The game was wild, too wild for my liking,” said Miller. “We can’t go and gift away chances like that.”

A few minutes later, the Fury had a chance to double their lead. FCE defender Albert Watson was whistled for getting his arm around Stewart. Referee Juan Marquez pointed to the spot. Ryan Williams, who the Fury signed for his set-piece ability, sent his effort to the left of keeper Matt VanOekel. And it was saved. But Marquez correctly noted that Diakite had sprinted into the penalty area too early — and ordered a retake. Williams went back to the spot, went to VanOekel’s right with the second effort — and had it saved again.

Not to be outdone by his opposite number, Ottawa keeper Romuald Peiser then made an outstanding double save on Eddies’ winger Sainey Nyassi. A third effort from Nyassi was cleared off the line by Timbo.

Nyassi was cleared to play after his red card from last weekend’s nasty draw with Puerto Rico was overturned.

Miller said the Eddies found out Wednesday that Nyassi’s suspension was cancelled. Nyassi was sent off for allegedly lashing out at Puerto Rico’s Ramon Soria, though replays couldn’t pinpoint a malicious foul.

“I have to give credit to the NASL,” said Miller. “Sometimes, the official makes mistakes. Challenging a red card can be expensive for a club. If it fails, it can mean extra games in suspension for the player. But we as a club were unanimous in our opinion that the referee had made an error. And I have to say the NASL was very professional and very thorough.”

But, the Fury doubled its advantage thanks to Canadian Maxim Tissot’s first NASL goal. Tissot was able to shake Eddies’ fullback Shawn Nicklaw and stick the ball in the open net after Williams’s low cross caromed off of Stewart.

From there, you wouldn’t have been blamed for thinking it was done and dusted. But the Eddies got off the deck and got one back, with Fordyce heading home Nyassi’s corner.

It set up a wild second half. Watson came within inches of tying the game with a header off a corner kick that grazed the outside of the post. But, just after the hour mark, Nicklaw sent a through ball that split the Ottawa defence. Fordyce ran onto it, took one touch and then placed a shot into the corner of the goal to tie it 2-2.

Ottawa’s Bryan Olivera then had two excellent looks at goal, set up both times by Stewart. But, both times, Olivera’s shots missed the target — badly.

It set up an exciting finish: In stoppage time, Adam Eckersley had a golden chance to win it for the Eddies, but Rafael Alves cleared the ball off the line.

The Eddies are now two points behind the New York Cosmos in the fall-season standings, but have a game in hand. The Cosmos play Fort Lauderdale on Saturday.

The Fury was without Jamar Dixon (Canada call-up). The Eddies were without regular starters Nik Ledgerwood, who came on as a sub in Canada’s 2-1 loss in Honduras, and Shamit Shome, who is with the Canadian U-20 side.