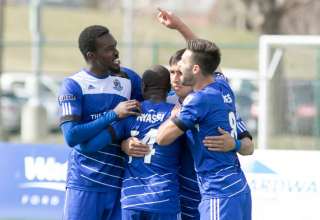 Both scored goals in last Wednesday’s 3-1 triumph in Ottawa, the first leg of the preliminary round of the Amway Canadian Championship. But for both of the forwards, they have had to prove themselves after finding themselves on the bench to start the season.

Fordyce, the second all-time leading scorer in FC Edmonton club history, only played in one of the team’s first three NASL games of the season. Ameobi sat out the first two, only to come in as a sub in game three, and score the winner in a 3-2 win over Fort Lauderdale.

Even though both found the net against Ottawa, they know there is no guarantee of playing time.

“For me, I just have to go out and do the right things,” Fordyce said after Monday’s training session. “We have some big, strong strikers in the squad. So I just go and work hard and remember that this is a team game.

“For sure, the squad is stronger than ever. We have brought in stronger players and the players who were here before are continuing to get better. The improvement in the squad means there’s even more competition for places, and those are all signs of a strong football club.”

Edmonton plays Ottawa in the second leg of the match-up at Clarke Stadium, Wednesday night. The winner gets the Vancouver Whitecaps in the semifinal round. With a goal on Wednesday, Fordyce would tie Dwayne De Rosario and Camilo for the all-time scoring lead in the Canadian Championship — at least since the tournament format to award the Voyageurs Cup was adopted in 2008.

Ameobi, who now has scored in two consecutive games, admits the start to the season wasn’t easy on him.

“Personally, it was a bit frustrating to not be involved in the first two games. But you also know that it’s a long season. “

After Ameobi came on and had such an impact against Fort Lauderdale, FCE coach Colin Miller said that if the striker could play at that level consistently, he’d be moving up to bigger and better things.

“It’s nice to hear the coach say things like that, because he believes in you,” said Ameobi. “But you can’t build a career on what other say about you. In the end, it’s up to me to perform, God willing.”

Miller said that, despite losing to Fort Lauderdale in NASL play over the weekend, he was impressed by what he saw with the Fury. And he doesn’t think it’s safe to count them out.

“The third goal was a critical one,” he said. “But the tie is not finished. We have to approach the game like the score is nothing each.”