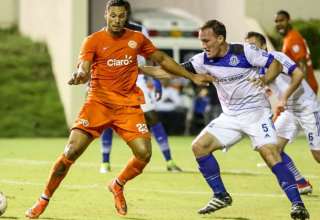 So, you’d think that getting your Canadian permanent-residency status would make things a little easier on an FC Edmonton player. No more occupying one of the team’s seven international roster slots. Travel to the United States for road trips should be easier. Canadian paperwork should become a heck of a lot easier.

But, he’ll spend the break between the spring and fall seasons working to get the paperwork in place so he can travel in the fall season. What? You ask — why does a Canadian PR have to reapply to travel? Are we living in a Terry Gilliam film?

You see, once someone gets his or her Canadian PR status, their previous paperwork from their country of origin isn’t valid anymore — even if it’s a nation that is a close ally of Canada’s. So, Watson, who came to FC Edmonton from Northern Ireland in 2013, can’t simply travel between Canada and the United States and back as a U.K. citizen. No, he now needs to wait eight weeks for his permanent Canadian PR card to arrive. Unless he makes arrangements for temporary travel papers, well, he can’t go out of the country and then return.

“The airlines don’t let you travel without your permanent PR card,” Watson explained after FCE’s training session on Wednesday. “So what I have to do is go out of the country on the break, apply for a temporary one, so I can travel in and out of Canada. It takes eight weeks for the PR card to come, so I would miss maybe five games. I don’t want that to happen. So that’s why I have to apply for this temporary one. They do make it complicated. It’s the airlines that do this. The immigration part is good. It makes no sense. I’ve got my PR, but it’s just that I need that permanent card.”

Watson and his wife are now in the process to get their Canadian passports, but he doesn’t have a timeline of when that would happen.

Of course, NASL’s paperwork isn’t as complicated. Watson is a PR, which means that the international roster slot he had occupied has now been freed. And that gives coach Colin Miller a little more flexibility when he goes looking for potential signings.

“I knew it was very close,” said Miller. “We knew we could do it (free up the spot) during the break. But, when I actually see it in my hands that Albert is Canadian, I’ll be a happier guy. What it does is that it changes the whole dynamic because it opens up a foreign spot for us and if (owners) Tom Fath and Dave Fath give me the go-ahead to bring in another foreign player, we will do that.

“It is exciting for Albert and Alison and their little one, I think it’s great for them. We’re in the best country in the world and I believe Albert and his family want to settle in Canada. Maybe, maybe not, I don’t know. But fair play to them. He’s been my best signing over the years and I’m very happy they’ve gone through the process and are now Canadian.”