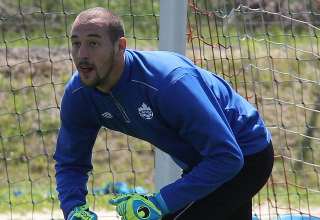 Canadian national men’s team coach Benito Floro has released the roster ahead of Sept. 9’s friendly in Toronto against Jamaica.

Of course, it is now the job of the media to second-guess him. And, specifically, I’ll look at the goalkeeping department, where veteran Kenny Stamatopoulos has been named to the team, along with Milan Borjan, who is unattached at the moment, and Quillan Roberts, the kid who was recently recalled from the USL back to Toronto FC, but isn’t seeing any MLS action.

Yes, Borjan is a veteran, but he doesn’t have a club. Roberts doesn’t have the club experience to help Canada’s senior team, yet. And there are other options out there. David Monsalve starts regularly at AC Oulu in Finland’s second division. His team is on an eight-game undefeated streak. Yet he hasn’t received any contact from Floro (I spoke with Monsalve yesterday — dropping a major hint towards what to expect in the “Passports” section of Plastic Pitch’s autumn issue).

But, while those players are in European second divisions, you could argue that at least they are getting significant minutes for their teams, which isn’t the case right now for Borjan and Roberts.

Roberto Stillo tweeted earlier this week that he won’t be back in goal for Perugia this season. But his name was also a notable omission from the Canadian roster.

Heck, you could argue that John Smits, who has started all but two games for FC Edmonton this NASL season, is a more valid choice at this point than Roberts.

All four of the keepers I have mentioned are under 30; which, for keepers, means they could play for Canada for a long time. Why not have a look for a diamond in the rough?

It’s food for thought; are there Canadian keepers out there, no matter what they do, who are frozen out of Canada’s plans?