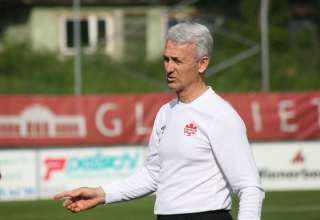 Canadian national team coach Benito Floro spoke via conference call with the media Wednesday. Ahead of Friday’s crucial World Cup qualifier in Honduras, the coach answered questions about the struggles of playing in Central America, how Canada has prepared to play in oppressive midday heat and came clean (at least more than he has in the past) on why he continues not to select Toronto FC midfielder Jonathan Osorio.

He also reiterated that fitness was the reason he opted to cut off his (Will) Johnson. The TFC midfielder has been playing regularly for the Reds since recovering from a leg fracture — but the long-time Canadian national-team veteran didn’t get the call for Friday’s game against Honduras or the Sept. 6 date in Vancouver against El Salvador.

Floro said once again that, in Johnson’s case, there “was not time enough to have a good recovery.”

And, when asked to address Osorio’s continuing omission, Floro said that he told the TFC midfielder that he needed to take advantage of all the minutes he’s getting with the Reds to become a better player. Osorio hasn’t played for the national team since the most recent Gold Cup, even though he’s second amongst all Canadians in MLS in terms of minutes played in 2016.

“He knows my opinion, I told him directly…” said Floro. “He has to take advantage (of his playing time) to create more chances and to score more goals.”

To be an attacking mid, Floro said “it’s not only to run around a lot.”

Floro was asked about how Canada will prepare for the myriad distractions that come whenever a Canadian side travels to Central America. And he said over and over that it’s not about what happens in the stands or at the team hotel; it’s about the game itself. He said his players all know how they are expected to perform, and what their roles are in the tactical set-up of the team. That’s all they need to be concerned about.

“The fans don’t come on the pitch to play, it’s not important,” said Floro.

And, later in the call, Floro said: “A game of soccer is a pitch. A ball. Referee. And tactical plans. The matter is to understand what we have to do.”

The forecast for Friday in San Pedro Sula is calling for midday temperatures of 34 C (before the humidex is considered) with the possibility of thunderstorms. The game will kick off at 3 p.m., barring a lightning delay. Floro said the team has taken the intense heat into consideration. Floro said that in the men’s national team’s most recent camp — in Austria — a lot of time was spent on how to conserve energy and stay fresh in extreme temperatures.

“What’s important is that the rhythm of play is close to the physical rhythm.”