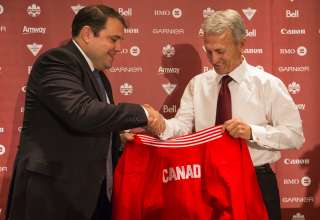 The Canadian Soccer Association’s broader visions for the men’s national team and Canadian soccer as a whole required a coach with a similarly broad pedigree. To that end, Benito Floro Sanz fits the bill. The 61-year-old Spaniard was introduced as Canada’s new head coach in Toronto on Friday, his first international post after 35 years of coaching and managing clubs all over the world.

The majority of Floro’s experience is, naturally, in Spain, where he most notably coached Real Madrid from 1992-1994 and served as the European giant’s director of football in 2006. Beyond La Liga and throughout the Spanish football league system, Floro has also coached in Japan, Mexico, Ecuador and Morocco.

It’s a resume that carries more international experience than virtually every other past Canadian head coach combined, which CSA president Victor Montagliani said was a key factor in Floro’s hiring.

“We’re a multicultural county and you want a coach that had the same experience in his travels,” Montagliani said. “Benito not only has this experience at the highest level with clubs like Real Madrid or Villareal but also experience in South America, Asia, CONCACAF so he kind of touched on all the boxes we were looking at.”

Floro’s influence is expected cover everything from getting Canada a higher calibre of competition for international friendlies to overseeing the country’s soccer operations. As Montagliani described, Canada has been “severely lacking that type of personality” who could put his own stamp on the national team while also leaving the program in good shape for the future.

“Once we interviewed him and went through that process, it was obvious that he was not only passionate about the project in Canada but he also had the ability because he’s so well-respected,” Montagliani said. “He brought a lot more to the table than just being a coach.”

While the men’s national team has seen (perhaps, “endured” is a better word) a number of these so-called new beginnings over the years, hiring a respected international name like Floro is a sign that the CSA is willing and eager to change its ways in order to finally become a legitimate threat in CONCACAF competitions. While it would be hard to see Floro remaining as coach if Canada comes up short in qualifying for the 2018 World Cup in Russia, he nevertheless has his eye on the long term.

“Every project has a short, medium and long terms,” Floro said. “We cannot take the short term because that doesn’t guarantee that we’ll have a good medium and long. What we want to do is maximize each level and that’s what I’m looking to do.

“When I was here to meet Victor, I had a good impression of his vision… “‘Vision’ for me is a special word. It means all your energy is focused on achieving some special goal. I think Canada needs to… not only qualify for Russia but [also achieve] other things.”

One of these goals includes helping develop the next generation of Canadian coaches. Floro brings along one assistant coach (Antonio Floro Esteve, his son) and will look within the country’s ranks for some homegrown coaching talent, Montagliani said.

For all of Floro’s experience, however, he has never coached any team for longer than three years. Combined with his age, it’s reasonable to wonder just how committed he is to the long-term plans espoused by he and the CSA. There’s also the fact that Floro has never been involved in international soccer before, though he came close to running Spain’s national team in 2004.

In fairness, as Montagliani pointed out, “not many managers stay anywhere for longer than three or four years” and the CSA president also felt Floro’s overall experience more than outweighs his lack of direct exposure to the world stage.

“Look at the clubs he’s coached. When you stand on the sidelines of Bernabeu coaching in El Clasico, I’m not sure coaching a national team is that intimidating,” Montagliani said. “Most national team coaches are of a certain age… I think he’s at that moment in his career.”

Once Stephen Hart resigned last October, the CSA dove into a long process of determining what exactly it wanted in a new Canada head coach and who the best person would be to fill that role. Montagliani said it received over 100 applications for the job and over 15 different candidates were interviewed, with Floro being the only one who was officially presented with a contract offer.

That contract is a three-year deal that carries options that run through 2018 — or through the World Cup, if Canada’s wildest dreams come true. Floro will watch the upcoming CONCACAF Gold Cup as an observer while Colin Miller serves as Canada’s interim coach, and Floro will then officially take the reigns on August 1. Floro will also coach Canada’s U-23 men’s Olympic team.

“It’s a great honour,” Floro said. “I hope to fill all the dreams of the country. It’s going to be difficult but I’m going to work hard.”