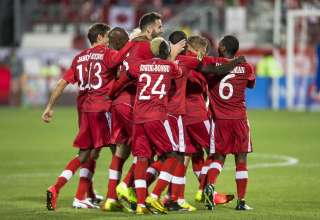 It was a glass half-full kind of night, wasn’t it?

Canada beat Jamaica 3-1 on Tuesday at BMO Field. It marked the first time our national men’s team scored more than a single goal in game for the first time since Oct. 12 2012; that was a 3-0 win over Cuba in World Cup qualifying, which came directly ahead of that 8-1 loss in Honduras which wiped out all hope of Canada qualifying for the World Cup.

Yup, I did it; I managed to immediately contrast Canada scoring three goals at home with giving up eight goals. That’s the cynicism that needs to be beaten out of the average Canadian soccer follower. It’ll take more than one win in a friendly at home to beat it out of me. Gah.

So, back to the glass-half-full bit. Yes, Canada’s first two goals came on set pieces, and the third goal was the result of a howler from Jamaican keeper Andre Blake — who certainly did nothing to convince his Philadelphia Union bosses that he deserves a shot between the sticks in MLS action anytime soon. But, still, three goals! And, for coach Benito Floro, his first win as Canada’s boss! For a Canadian team that can’t afford to slide any further down the CONCACAF rankings, it’s something that will go some way to build belief that, maybe, just maybe, this country can score some goals at the next Gold Cup and maybe, maybe, maybe, qualify for the Copa America.

But, before we can dream about Canada in action against the likes of Lionel Messi or James Rodriguez, let’s focus on what went right against Jamaica.

Jamaica actually took the lead, with Kemar Lawrence beating Canadian keeper Milan Borjan with a free kick from a little more than 20 yards out.

But, about a minute afterwards, Canada equalized; a corner kick — was it on purpose or was it mishit? — sprayed off the foot of Patrice Bernier, outside the top of the box. Defender David Edgar volleyed it first time, and the ball skipped into the goal. Canada’s Julian de Guzman made the right call to jump over the ball and acted as a bit of a screen for Blake.

In the second half, Jamaica’s Jamar Loza got behind the Canadian back line a couple of times, but Borjan was able to come well off his line and foil the chances. In fact, even though Canada was better going forward than it has been in a long time, the Jamaicans were able to pierce the back line with diagonal balls on more than a few occasions.

But, if the trade off is a few more goals and scoring opportunities, well it’s not such a bad thing. What Canada needs more than anything else is to build confidence in its attacking players.

After Loza gave Canada a couple of scares, Marcel de Jong beat Blake from almost the same spot that Lawrence scored from in the first half. His free kick left Blake rooted to the spot, and the keeper could only watch the ball fly into the top corner.

But Blake had a lot to answer for when it came to Canada’s third goal; a tame cross from Simeon Jackson went right into the keeper’s arms; but Blake spilled the ball, and Tosaint Ricketts took advantage of the situation by blasting the ball in the open net.

Was it pretty? No? Did Canada create any tic-tac-toe combinations in the box that led to goals? No. But, dammit, a win is a win. And it’s been a long time, almost two years, since Canadian fans could celebrate one of those — at least when it comes to the men’s program.