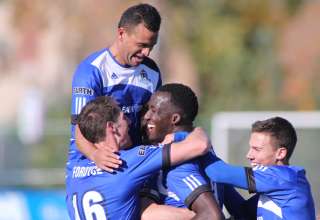 As the New York Cosmos continue their winning ways and look destined for the top seed in the NASL post-season, with each passing week it is seeming more likely that the Indy Eleven will be the No. 2 seed and FC Edmonton will be at No. 3.

Of course, that would mean that the two teams would meet in November’s NASL semifinals in Indianapolis.

So, Sunday’s meeting at Clarke Field between the two sides felt like a post-season preview. And the Eddies got a late goal from Ben Fisk — his first in the NASL — to take a 2-1 decision. That finishes the season series between the clubs, Indy and the Eddies each taking a home win, along with a draw between the clubs in Indiana.

Fisk, who came on as a second-half sub, took a pass from fullback Shawn Nicklaw and then fired the ball across Eleven keeper Jon Busch and into the corner of the goal.

For Fisk, who has been hitting goalpost after goalpost since joining the Eddies this past summer, getting one to hit the back of the net was a major relief. And it was a major boost for a team that hadn’t scored since Sept. 2’s 2-2 draw in Ottawa.

“It’s obviously been a frustrating few games,” said Fisk. “We’ve been coming close, creating great opportunities and stuff, but lacking those goals. So, just to get the monkey off the back, to get that first one, it was huge for the group. To get that second one, it was massive.

“It was one of the last plays of the game, so I was trying to give it everything I’ve got to get up in the play. It was a great pass by Shawn, I just took a touch and put it back across the keeper.”

For the Eddies, though they will likely start the post-season on the road, it must be a confidence boost to know that their record is very good against the first-place New York Cosmos and the Spring Champion Indy Eleven. The Eddies won two and drew one against the Cosmos. They were 1-1-1 against Indy, but that aforementioned loss came when FCE were without starting centre backs Pape Diakite and Albert Watson.

But, just before the 80-minute-mark of Sunday’s game, things weren’t looking nearly as rosy for the home side. They were down 1-0 to Indy, thanks to a goal from Eamon Zayed. The Eddies were about to hit 558 minutes of NASL play without scoring a goal. Daryl Fordyce and Tomi Ameobi had each seen golden chances to score end up missing the target.
And it looked dangerously like the team’s winless skid was about to be extended to seven games.

It was Diakite, who smashed a shot into the roof of the goal after a scramble in the box — where the ball was cleverly kept alive by Fisk at the end line just seconds before — who ended the scoreless streak and turned the game on its ear. And it set up the furious finish.

“We never stopped, we tried to keep going,” said FCE coach Colin Miller. “We never dropped our heads at any point. We never felt sorry for ourselves, even though it wasn’t our best second-half performance of the season. The subs added a bit of energy to us. But, Fisky, I’m delighted for him. His name was ‘Woodwork,’ he was hitting it so many times.”

The teams went to halftime tied 0-0, but the Eddies could thank keeper Matt VanOekel for just getting enough of his hand on a shot from Dylan Mares to deflect it off the bar. Mares has continually been a thorn in the side of FC Edmonton, so much so that it might be time to declare him the new Tommy Heinemann — the man who continually haunts the nightmares of FC Edmonton fans.

But Zayed gave the visitors the lead 11 minutes into the second half; he was able to separate himself from Nicklaw and directed in a low cross from Mares.

The Eleven, though, weren’t able to survive the dramatic end.