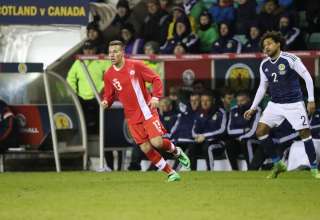 When FC Edmonton paused its first-team operation at the end of the 2017 NASL season, Ben Fisk had options.

He has interest from quite a few USL clubs and a couple of MLS teams. But, after spending the previous season and a half playing in his home country, the midfielder wanted to head back to Europe. The former Vancouver Whitecap had previously spent time plying his trade in Spain.

But, after waiting out a fruitless January transfer window, would his decision to push for a European return pay off?

The dominoes began to fall in May. Derry City, the Northern Irish club that in the mid 1980s received special dispensation to play in the League of Ireland, announced that it would be selling left winger Ronan Curtis to Portsmouth. And Derry City’s manager is Kenny Shiels, father of Dean Shiels, who spent part of the 2017 season as Fisk’s teammate in Edmonton.

So there was a team in Europe, with a connection to FC Edmonton, in need of a player on the left side. Hmm.

On Friday, Derry announced Fisk as the club’s newest signing. He’s on contract till the end of the season.

“It was 100 per cent the connection,” Fisk says over the phone from Northern Ireland. “Derry sold their left winger to Portsmouth, and Dean mentioned me to his dad, and his dad had seen some of our (FC Edmonton) games.”

Fisk has been abroad for two weeks, waiting for his paperwork to go through. Now, the next step is to get back to match fitness. He hasn’t been in a pro match since November.

Then, Fisk will be looking to prove himself in League of Ireland matches, because his goal is to impress enough that he can extend his stay in Europe.

As well, Derry City has an upcoming Europa League qualifier against Dinamo Minsk.

“It’s a big thing for me,” says Fisk. “As a kid, you grow up dreaming about playing in a European competition. Dinamo Minsk has qualified for the Europa League a couple of times, so it will be a challenge.”

Fisk has said that staying in Europe is his priority, but he’s still following the rise of the Canadian Premier League. FCE will return as a member of the new CanPL; four other teams have been announced, and Hamilton’s coming-out party is still to come.

“I definitely won’t rule out the CPL,” says Fisk. “I am very excited about the CPL, like a lot of Canadian players are. I’m not going to say it isn’t an option. I’d be proud to be part of the CPL.”

Fisk isn’t the only former Eddie to play in the League of Ireland. Canadian keeper Tyson Farago and American forward Jake Keegan are over at St. Patrick’s.

“I played a lot against them in training,” says Fisk. “That’d be great if I can bang one past Tyson! But it will be great to have a chance to catch up after the match.”