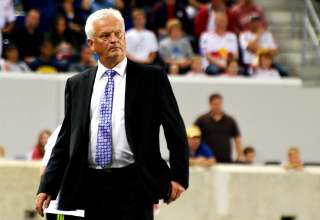 On Sunday, Major League Soccer announced its First XI for its July 27 All-Star Game. And coach Hans Backe already knows he will likely have two absentees for the match against Manchester United.

With the MLS All-Star Game once again going head-to-head against the qualifying round of the CONCACAF Champions League (Toronto FC will face Real Esteli at the same time the All-Stars will take on Manchester United), two of the players selected in the First XI — Kasey Keller and Brek Shea — will be question marks for the game.

“The First XI is not necessarily the starting lineup,” stated MLS in the release of its First XI roster. “MLS All-Star coach Hans Backe will select the starters based on player availability and tactical considerations. If First XI selections are unavailable due to injury, international duty or other commitments, Backe will select alternates for the game day roster, but all First XI players are All-Stars.”

“International duty” are the key words.

Seattle Sounders keeper Keller will be on the road with his team, playing in Panama against San Francisco, the night before the All-Star Game. So it’s difficult to imagine that he’s be available for the match at Red Bull Arena.

FC Dallas star Shea will need to be in El Salvador the day after the All-Star Game as his club faces Alianza in their CONCACAF Champions League qualifier. And we all know that teams don’t travel on game days; FC Dallas will need to be in Central America ahead of the game to prepare. So, Shea is a definite no-go.

Remember that, back in February, when the All-Star Game was announced, MLS commissioner Don Garber pledged that every player named to the roster would be available for selection. (SEE HERE.) Of course, it was bravado, as neither Garber nor MLS can fully control the First XI, which is influenced by fan and peer voting. (Fans voted based on carefully vetted lists created by a select panel of experts).

So, quickly after the announcement of a First XI, MLS now has to do yet another about face and admit some All-Stars won’t be available because they have more important things to do that night.