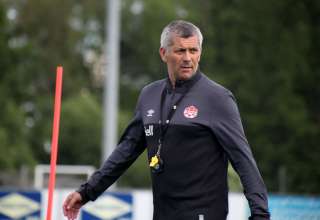 You don’t have to really be an expert in reading between the lines to come to this conclusion: Michael Findlay wants to use his time as the interim coach of the Canadian men’s national team to prove that he deserves to be the side’s full-time boss going forward.

He didn’t say it outright, but Findlay did everything but spell it out when he spoke with reporters Friday.

When asked about what he has to do as the interim coach of the national side, Finday said: “To have actual objectives to hand off to the next coach down the road, if it is not me.”

Emphasis on if it is not me, please.

He was later asked outright if he wanted the full-time job. He said that would be a decision made by Canadian Soccer President Victor Montagliani and General Secretary Peter Montopoli, but then added, “for me, personally, there isn’t a Canadian out there who doesn’t want to be the full-time coach.”

So, it’s pretty clear that Findlay is seeing the next few months as an audition — and it begins October 7 and 11 in Morocco, as Canada faces Mauritania and the host nation in friendly match-ups. The roster was announced Friday. Findlay will have a nucleus of young players, mixed with some veterans. Veteran midfielder Akiba Hutchinson, currently with Turkish giants Besiktas, is taking time to ponder his national-team future, and Findlay said he will respect that. Findlay said that striker Cyle Larin turned down the invite, as he wants to focus on the stretch run of the Major League Soccer season with Orlando City FC.

But Findlay said that, even though this international window comes just a month after Canada was eliminated from World Cup qualifying and coach Benito Floro departed, it’s important for this country’s national team to play.

“We want to play in all the FIFA dates,” he said. “We cannot afford to go dormant.”

As well, the roster features Toronto FC midfielder Jonathan Osorio, who has been frozen out of the national side by Floro since the Gold Cup.

While Floro had been critical of Osorio’s play, hinting that he wanted to see more out of him than a player who “ran around a lot,” Findlay — who had been Floro’s assistant — struck a more conciliatory tone. He said that Osorio simply didn’t fit into Canada’s tactical plan in the World Cup qualifiers, but that the midfielder was never really on the outs.

“It doesn’t mean that Oso wasn’t seen as a valuable part of Canada’s future.”