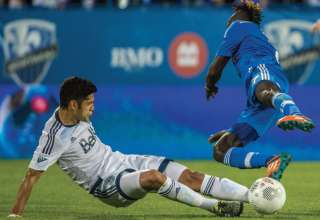 The Canadian Championship has been a truly wretched competition for the Vancouver Whitecaps, or at least it was.

Lifting the Voyageurs Cup for the first time – at the 14th attempt – it was fitting that the longest serving member of the Whitecaps, and the player awarded the tournament’s most valuable player, had the
best response to sum up the feeling of the occasion, a 2-0 victory at BC Place to win the final 4-2 on aggregate over the Montreal Impact.

While playing down the importance of the MVP trophy, the 22-year-old central midfielder did admit that winning the domestic championship as a Canadian did mean a little extra.

“I wanted to win this trophy.”

Adding to the club’s misery in this competition in recent years has been the fact that the Whitecaps have come so close, so often, only to fall short time and time again.

Before this victory, the Whitecaps had finished runners-up in five of the last six editions of the tournament.

Teibert’s central midfield partner on this night was Gershon Koffie, the only man on the winning roster to play in the club’s three losing finals in 2011, 2012 and 2013.

“It means a lot to me,” the Ghanaian said after the victory. “I’ve been with this club all this while, and this is my first trophy. I’m so excited.”

Celebrations aside, perhaps as expected given the club’s history in this tournament, the Whitecaps didn’t make it easy on themselves.

Just four minutes into the team’s first match in this competition, the ‘Caps conceded a goal to FC Edmonton’s Tomi Ameobi, as the forward latched onto a giveaway from Koffie right in front of the box to beat backup goalkeeper Paolo Tornaghi, who was making his debut.

It was a crucial away goal for the Eddies, but Koffie made amends and scored an equalizer in the 87th minute, meaning it was all square at 1-1 on aggregate in the first match of the two-leg tie.

The return leg in Edmonton wasn’t any less dramatic. Whitecaps Designated Player Pedro Morales fired the Whitecaps into the lead from the penalty spot in the seventh minute, and then when it
looked as if the visitors were going to sneak into the final, the Eddies earned a penalty of their own in the first minute of stoppage time.

Up stepped Ameobi and leveled the score at 1-1 on the night, and 2-2 on aggregate.

Surely that meant the match was headed to extra time? But no, stoppage time seemed to last an eternity, and the Whitecaps were the beneficiaries, as defensive midfielder Matias Laba scored a rare effort just moments after Ameobi’s equalizer. It would mark the second year in a row that FC Edmonton was eliminated at the semifinal stage by a goal scored after the sixth minute of added time in the second leg.

(In the previous issue of Plastic Pitch, thanks to help from a University of Alberta statistician, we showed that the odds of losing at the semifinal stages two years in a row, on goals scored in six-plus minutes of added time, were calculated to be more than 1.14 million to one).

It was on to the final for head coach Carl Robinson’s men.

After a scoreless opening half, the Whitecaps leaped into the ascendancy with Darren Mattocks scoring the first goal of the tie in the 65th minute. Young academy product and Canadian youth international Kianz Froese played a key role in the play to set up the Jamaican with a wonderful run down the left side.

Seven minutes later, Morales threaded the needle with a free kick from an acute angle to double Vancouver’s lead.

With a score of 2-0 on the road, against an Impact team struggling to score goals in league play, it was difficult to see Montreal getting into that match, or indeed back into the tie.

But soccer is a funny old game, and with two quick conversions – one in the 84th, and one in the 85th, the Impact erased what had been a fine night for the visitors. Depending on who you were rooting for, it was a collapse of epic proportions, or a comeback for the ages.

One thing was for sure. This was going to be an interesting second leg.

That didn’t in fact end up the case.

Star Didier Drogba didn’t show, days after making his MLS debut for the Impact. That was the first letdown.

While the championship party may last long in the memory, the game itself wasn’t particularly memorable, thanks largely to Victor Cabrera getting himself sent off just half an hour in after picking up two yellow cards.

The Whitecaps did the expected thing with the man advantage, Octavio Rivero guiding home a ball to claim the match’s opening goal after the Christian Techera forced Impact netminder Eric Kronberg into a double save – Techera’s effort would have gone in without his countryman’s final touch, but the diminutive winger didn’t seem to mind.

Tim Parker then doubled his team’s lead in the match and on aggregate with a headed effort from the corner in the 53rd a minute, and the Whitecaps comfortably cruised to victory.

The result means the Whitecaps get to compete in the CONCACAF Champions League again next season.

But Robinson hopes the Canadian Championship win is contagious, and gives his young side confidence to compete for an MLS Cup or honours in the Champions League.

“We managed to win the Cascadia Cuptwo years in a row, which is great,” said Robinson. “That’s credit to the group of players and the supporters, but we hadn’t won this. It’s a first step. I keep saying to new fathers with their kids, they got to learn to walk before they can run. That’s what we’re doing here bit by bit.”