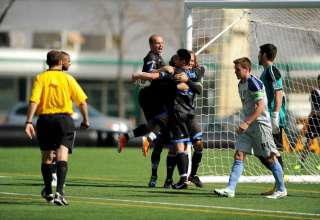 Doctors have told FCE midfielder Ilja Van Leerdam has been told to stay off his injured knee — and if he isn’t pain free in the coming weeks, surgery may be needed.

FC Edmonton confirmed the diagnosis on Thursday. The injury is to the MCL, but it isn’t known how severe it is.

Van Leerdam hobbled out of a 1-0 home loss to the Tampa Bay Rowdies two weekends ago, and the Dutch international was not able to train last week.

He wasn’t on the team’s current road trip, which sees it head to Tampa this weekend after winning in Atlanta last Saturday.

Van Leerdam joined FCE at the halfway mark of the 2011 season. He has a goal and three assists this year and is third on the team in minutes played.