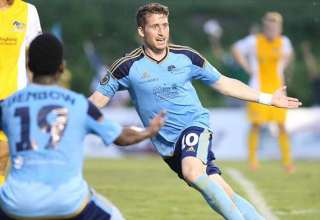 In 2015, Jason Plumhoff scored 10 times for the Harrisburg City Islanders and finished 10th on the USL’s league-wide scoring charts. But, while the Islanders offered to bring him back foe 2016, he felt that he needed to move on.

And that opportunity came north of the American border. Even though FCE coach Colin Miller let the cat out of the bag at a season-ticket holder’s event last Sunday, on Thursday FC Edmonton officially announced Plumhoff’s signing.

“He’s very highly thought of in that USL setup,” Miller said of Plumhoff, an American who was born in Germany. “He came very highly recommended to us. So we watched the videos and I spoke to him. I liked what I heard and definitely liked what I saw. His pace, his athleticism and once he realizes this level of football I think he’ll be a very good, strong addition to the squad.

“He’s got a hunger to get to the next level, which is great. He will seriously put other players under pressure. And that’s what I want.”

Miller said that Plumhoff is about a week behind the rest of the squad when it comes to his fitness level. And that comes with not being signed from when camp began.

Plumhoff said that he knew after one season in Harrisburg that he wanted to try and move up the ladder. As soon as Edmonton and him made contact, he knew that Canada was where he wanted to be.

“I thought it was a great opportunity for me. I took it right away. Harrisburg asked me to come back for next season but I was looking to make the transition to a higher level. I think Edmonton offers that higher level for me, in the NASL. I was happy that they were interested and brought me here.”

He’s been with the team for about a week, though it took some time for his paperwork to be processed (and why it took a few days for the team to announce the deal. The team doesn’t officially announce signings until the contract is signed, the player’s undergone his medical, the FIFA paperwork is done and the NASL has signed off on the contract). So far, Miller likes what he’s seen, and Plumhoff is pleased with the level of play.

“He can play either side or through the middle as well,” said Miller. “But he’s got the pace to play at this level of football. In the North American game, in general, there’s an element of a track meet. You see some of the European leagues, they’re all specimens and fit, but there’s an element of MLS and NASL where the game is, at times, a track meet. You are oftentimes playing in incredible heat and you have to be physically fit. That’s one of the key components of playing at this level of football in North America. And Jason epitomizes that sort of mentality.”

“I think it’s (the level of play) is high, everyone’s competing for spots,” said Plumhoff. “I have enjoyed it so far. I’m just trying to get better, listening to what coach Colin Miller’s telling me. Just trying to soak everything in. I’m really excited and looking forward to this trip to Scotland and I think it’s going to help me develop as a player.”