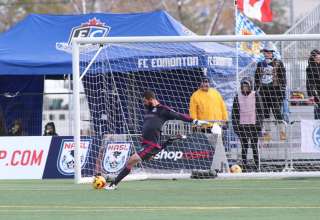 The award goes to the keeper with the lowest goals-against average in NASL, so the announcement of Matt VanOekel as the winner of the league’s Golden Glove award was merely a formality.

But the league announced VanOekel’s award win on Monday. The FC Edmonton keeper enjoyed a record-breaking season, recording a league-record 16 clean sheets and a goals-against average of, whelp, 0.55.

“It’s a nice personal accolade that I’ll get to have on the shelf for many years to come, and I’ll be able to show my kids and grandkids,” VanOekel said in a release issued by the league.

He is the second FCE keeper to win the Golden Glove award. Canadian keeper John Smits won it in 2014. Smits spent the 2016 season with the Wilmington Hammerheads of the USL; that team is downgrading and moving to PDL next season, leaving Smits as a free agent.

The real question is whether or not MVO will take the league’s MVP award. He’s one of the finalists in the voting.