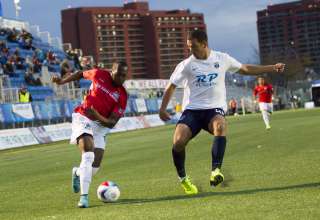 I first met Tom Fath seven years ago, when FC Edmonton was in the process of going from the planning stages to being an on-field concern.

Over the years, I have known him to be many things: An enthusiastic community booster, an advocate for soccer (though he never played the game much) and, many times, when things were tense, he would keep things close to the vest, in order to protect the interests of him and his partners. He was always very good at returning calls, but he would be up front about telling you what he could, and couldn’t, comment on.

One thing, though, I have never seen Fath do is bluff. He’s never purposefully laid out claims to the media only to further some kind of agenda. He does not negotiate through the press.

So, when he very bluntly put it out there Friday that not only was FC Edmonton ceasing its pro operations, there was no guarantee that it would be revived to join the Canadian Premier League, there was absolutely no reason to take it at anything else but face value.

Ironic, on a day that many Canadian Premier League supporters-to-be took to Twitter to vote for their favourite team scarves — an exercise to build hype around the coming league — Fath delivered a pretty large blow.  He said that he was not convinced that his team could be “sustainable” if it was to be revived to  join the new league. It was a massive statement of uncertainty. And, to be clear, while he said the NASL’s ongoing battles with the United States Soccer Federation, it was only an additional difficulty placed on top of what was already a bad situation. He gave every indication that, if all was rosy with the NASL, FC Edmonton might still be making the same decision.

The sustainability issue is a lot more than the lack of bums in seats.  Let’s first look at the City of Edmonton itself. When the Oilers made the playoffs for the first time in a decade last season, city councillors wore orange jerseys. They broadcasted their pride. When FC Edmonton battled for first in the league and made the playoffs last season, nada.

Years ago, the city made a pledge to explore expanding Clarke Field if FCE regularly sold out. FCE rarely sold out — but there was little from the city to promote the team. No rallies or wear-blue days or rallies for the team — the kind of things we normally see from various business associations and city government when the Oilers and Eskimos are doing well. Since then, FCE has paid for new seats at Clarke, it brought in a new replay screen. While other sports owners cry for money, FCE made a lot of the improvements on its own dime. But, while the Eskimos and Oilers were often treated as partners, FCE was simply a tenant.

(I did see NDP MLA Dr. Bob Turner wear his FC Edmonton scarf to a Northlands Farmfair event earlier in November, so there’s that.)

And corporate Edmonton, as Fath said, did not support the team to the level that had been hoped. Again, FCE was treated as an ugly stepchild in this city.

How much of that was the fault of the team’s front office? Promotions (or lack of them?). That’s a cause for debate. But, last season, when this team was in a battle for first place in a league that featured the likes of Miami and New York, FCE didn’t cross into the mainstream. Businesses didn’t jump on it.

Well, now me may reap the whirlwind. FCE is one of four Canadian finalists to host World Cup games in 2026 (if the U.S./Canada/Mexico bid is successful); but what does “oh, we lost our professional soccer team due to mass indifference”  say to those making those decisions? The Edmonton Economic Development Corporation can do all the promotions it wants, but it’s hard to tell anyone that you can be a soccer city, worth hosting national-team competition, when you can’t sell 4,000 not-expensive tickets to see a pro soccer team. It will be much harder to sell Edmonton to the World Cup Bid Committee and FIFA with a straight face, now.

FC Edmonton plays (sorry, played)  in a city-owned stadium, did not have primary tenant status, and would often have to take the game dates presented to them. So, they got Sunday afternoons, a brutal time in which to draw fans in the Alberta summer. Yes, in previous years, TV also played a factor into Sunday afternoon games; but, there was a conscious effort made in 2017 to move some games to Fridays and Saturdays, even if it meant losing TV coverage. I lost count of how many times I’d be at FCE practice, it would end at noon, and the team was told it could not be on the field one minute longer — even when there was no one scheduled to have the field behind them.

The stadium had one bathroom area each for men and women.

Yet it was the team that footed the bill to boost the capacity of the stadium.

Then, we get to the Canadian Premier League. Fath has been religiously attending the meetings. On Friday, he reiterated that the CanPL “is exactly what Canada needs.” He is on board when it comes to finding a way to give developing Canadian soccer players a chance to play. It’s the reason he will continue to foot the bill for the FCE Academy.

But, at the same time, he openly doubted FCE’s potential to be financially viable in CanPL. It was anything but a “we’re in for 2019” statement. He said he needs to know ticket sales will be better and, maybe more importantly, that corporate support will be better. That will be the challenge for CanPL; to prove it can pull the kind of corporate support needed to keep someone like Fath on board — before a ball is kicked.

Plus, on the PR side, it doesn’t help anyone trying to sell the notion of CanPL that the owner of a team in Canada’s fifth-largest city (and an economic power, one of the fastest growing cities in North America) is now openly on the fence when it comes to viability of soccer outside of MLS. If it doesn’t work in Edmonton, will it work in Halifax? Winnipeg?

In the end, FC Edmonton’s demise may just prove that in the world of pro sports, maybe nice guys do finish last. Fath paid to double Clarke’s capacity by bringing in the grandstands. He never said much to the media that challenged the status quo.

Maybe he would have been better off demanding millions from city council, threatening to move the team, complaining to the media whenever he could.

(Fath is the only voice for FCE at the moment. I have contacted players and they have been requested not to speak. Staff have confirmed that, right now, all comments about the club will come from its owner. Those around the team are respecting the owner’s request.)