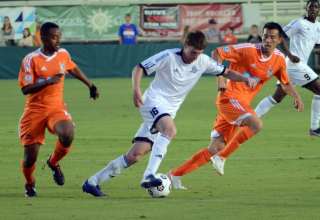 For the second week in a row, the frame of the goal stood in the way between FC Edmonton and needed goals.

Last week, the Eddies hit the woodwork twice and settled for a 1-1 draw with the Fort Lauderdale Strikers in their NASL season opener. On Saturday, it was another two goalposts off of clear scoring chances, and FCE and its supporters can only wonder what could have been, as the Carolina RailHawks opened their renovated new home park with a 2-1 win over the Eddies.

Austin Da Luz scored the opener early in the second half, beating FCE fullback Edson Edward at the post and then bundling home a perfect cross from winger Ty Shipalane, a player who has consistently given the Eddies fits over the past two seasons. Shipalane was able to keep a ball in play and then floated a dangerous cross in from the right side.

Brian Shriver wrapped up the points in the 71st when his perfect 20-yard free kick found the back of the net. Massimo Mirabelli found the net in injury time to get the Eddies back to within a goal.

But the Eddies had a couple of golden chances to score. In the first half, striker Daryl Fordyce slammed a shot off the post, then had his attempt to bang in the rebound blocked. In the second half, shortly after the RailHawks had scored the game’s first goal, Michael Cox, the Eddies’ most dangerous player on the night, shuffled the ball and then smacked an effort off the post.

“I feel like the better team lost,” said FCE coach Colin Miller. “I’m not saying that because I am bitter, but because I think the players acquitted themselves well and I am proud of that. The thing is that when we get a wee break in front of goal, we have got to take it.”

And, just like last week, the Eddies could have had a last-man-back decision go their way. And for the second week in a row, it didn’t. This week, it was Cox, who was able to split the RailHawks defence and looked to be clear. Defender Austin King hauled him down from behind, but the card shown was yellow, not red. The score was 1-0 at the time, and Saiko just missed the goal with the ensuing free kick.

To be fair, Miller said he felt the referee made the correct decision with the yellow.

Miller made one change from last week’s starting XI; he brought in teenager Edem Mortotsi into the midfield, replacing Antonio Rago. The Eddies got off to a nervous start. And, before the game was a minute old, keeper Lance Parker was forced to block a decent attempt by Shriver off a corner — the set piece, a problem last year, still a nemesis for the Eddies.

Cox, though, had an even better chance in the 13th minute, forcing RailHawks’ keeper Akira Fitzgerald into a leaping save after the striker charged in from the right channel.

Cox gave the RailHawks’ defenders fits for 70 minutes, but couldn’t find the right touch — or the luck — to get the ball across the line. After the Shriver goal made it 2-0, 17-year-old striker Sadi Jalali made his NASL debut, coming in for Cox.

Rago, who came in as a second-half sub, had a great chance to get the Eddies a late consolation goal, but his effort was denied by Fitzgerald, who was named the NASL’s Defensive Player of the Week for his work in a 0-0 draw with the Tampa Bay Rowdies last week.

The subs would have an impact before the final whistle. Jalali set up Mirabelli, another sub, for his first NASL goal.

“We tried to be as positive as we can with the substitutions,” said Miller. “Sadi came in, and as a 17-year-old, he did not look like he was out of place on the pitch. And then he sets up a goal, and Mirabelli has got to be one of the most frustrating players I’ve worked with. He comes in a scores a goal. He can do some great things with the ball, he’s just got to work on some of his decision-making.

“But I look at our bench and it’s like Brady Bunch, they are all so young. And we have another good one coming back (Hanson Boakai, currently with the Canadian team that qualified for the U-17 World Cup Saturday).”

Mirabelli, who was the only player who came to last November’s pro combine to make the team, benefitted from some great work from the teenager, Jalali.

Had the goalposts not played such a role, it might not have been a consolation goal.