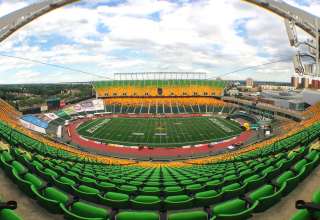 FC Edmonton has announced that its NASL fall-season home opener against the Ottawa Fury will be moved to Commonwealth Stadium.

But just how many — or how few — sections of the 56,000-seat stadium will be filled could depend on television licensing issues.

The Eddies were forced to move the game because they could not be 100-per-cent guaranteed that the installation of a new turf surface at Clarke Stadium would be done in time for Sunday’s match. General Manager Rod Proudfoot said it was likely that the Clarke Stadium work would be done on time. But, “likely” isn’t the same as “guaranteed.” And even if there was a one per cent chance that the Clarke resurfacing wasn’t going to be on schedule, the game had to be moved.

Now, this is where it gets tricky. The World Cup final kicks off Sunday at 1 p.m. local time. FC Edmonton hopes that it can open the Commonwealth gates at noon, and then show the game on the brand new Jumbotron that has been installed at the stadium. But it’s not that simple. The team confirmed it needs to ensure it has the rights to show the game at a ticketed event. And that means approaching either the CBC and/or FIFA.

If it does get the rights, then the team has a great marketing tool to sell last-minute tickets. Fans can gather in a large group to watch the game on the biggest public viewing screen that can be found in Edmonton. For a $20 ticket, fans could watch the World Cup on the big screen and then enjoy the Eddies game, which kicks off at 4 p.m. local time.

The team is planning to open four sections of the stadium for the game — S, T, U and V.

But, if FCE doesn’t get the rights, doors won’t open till 3 p.m.?
And, for those watching the World Cup, it means a sprint to the stadium to catch the Eddies game — or not. If the World Cup final doesn’t go into extra time, it should wrap up at 3 p.m. local time. That would give fans an hour to get to Commonwealth for kickoff.

If the final goes into extra time and/or kicks, it might not end till just before the Eddies’ game is about to kick off.

So, unless the fans are already in the stadium to watch the game, it’s a safe bet that the World Cup final will hurt attendance — in a game being played in a cavernous venue. That’s why it’s important for the Eddies to get the rights to show the World Cup final.

The game kicks off at 4 p.m. local rather than the usual 2 p.m. start time to accommodate the World Cup. But, because of television commitments, the Eddies cannot push back the kickoff of their game against the Fury and further.