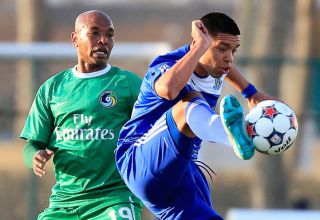 New York's Marcos Senna watches as FCE's Milton Blanco gets a foot to the ball in action from earlier in 2014. PHOTO FC EDMONTON/TONY LEWIS

Milton Blanco feels guilty. He came to FC Edmonton with high expectations for the team and for himself. He knew that FCE owner Tom Fath has a reputation for treating the players well, and Blanco wanted to repay that faith with a standout season.

But, after being a cornerstone of the Atlanta Silverbacks lineup last season, injuries have prevented Blanco from becoming an everyday Eddie. A broken hand robbed Blanco of the majority of the spring season. Then, after a bright start to the fall season, Blanco hurt his knee in an early August game against the New York Cosmos. And, for another month, Blanco was on the shelf, wearing the red shirt in training.

“I feel bad,” says Blanco. “I feel like I have not contributed as much as I wanted to. I feel bad because of all the faith Tom Fath and the coaching staff here put in me when they brought me here. Unfortunately, I broke my hand and, then after I got the chance to play again, then it was my knee.”

But Blanco will be back in the lineup this weekend, as he’s been cleared to travel to Indianapolis with the Eddies for this Saturday night’s match against the Eleven. He’ll be needed; because of red cards issued in last week’s 3-0 loss to the San Antonio Scorpions, holding midfielder Cristian Raudales and right back Edson Edward are suspended. And coach Colin Miller is waiting on the status of two players who might not make the trip — but he wouldn’t publicly say which players are questionable for the game.

We’re in that part of the season, after all; the stretch run — and coaches will play it even closer to their vests than normal. The Eddies are just four points behind the Tampa Bay Rowdies for fourth in the overall standings — which comes with a spot in the four-team post-season.

Michael Nonni, who missed last week’s loss to San Antonio, is fit again — so he’s not one of the two in question.

With so much on the line in term of the post-season race, and with lineup headaches, there’s no way the Eddies will take the game for granted, even if the Indy Eleven have the worst overall record in NASL this season. After all, the Eleven beat the Eddies 1-0 in Edmonton earlier in the fall season, in a bizarre game which saw the home side miss a shocking number of sitters.

“They (Indy) went to Atlanta and they won there; I watched the game and they deserved to win,” said Miller.” “We played them here, we outshot them something like 27 to 11, and we still lost the game. When we beat them in Indy (in the spring season) we played well for three quarters of the game and them tried to throw it away at the end.”

And, Miller and the Eddies are looking forward to playing in front of a full house in Indianapolis. The support for the expansion Eleven has been fantastic — but there’s one thing; great atmosphere in a stadium also fires up the road team.

“It’s great going there, it’s a great occasion,” said Miller. “The guys have been there, they know what to expect. But there will be lots of people, and we have plenty of incentive.”

And Blanco has his own personal incentives He wants to be more of a contributor to the FCE season. When asked if he could go 90 on Saturday if that’s what the coach needed, Blanco nodded.

“I am ready. That’s the thing, you work even harder when you’re injured than when you’re not injured. You’re doing extra sprints and extra work, not just games.”