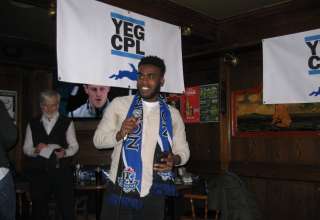 Invitations went out to 50 season-seat holders, and representatives from the major minor-soccer organizations in the Edmonton area.

But, far more than 50 showed up at a small south-side pub Wednesday night to see FC Edmonton launch what team General Manager Jay Ball coined “the greatest comeback story in the history of Edmonton sport.”

(Warning: There is going to be a lot of hyperbole in the coming paragraphs).

And it all needs to come together awfully fast, as time is ticking for FCE to say yea or nay to the new Canadian Division-1 pro league.

The meeting launched what the club says will be a make-or-break period that stretches over the next 40 days. Fans on hand pledged that they would buy season seats, and spread the word about the Eddies, to raise the team’s profile in a hockey-mad city. And this is the perfect time; with the Oilers finishing off the most disappointing campaign of any of the NHL teams this season.

Ball said that 100 season-seat commitments were sold on Thursday. A rallyrabbit.ca website is now up and running. He said during the event that he hopes for a number that swells past the 1,000 mark over the next 40 days; the 1,000- seat mark equals the number of season tickets the team sold in the 2017 NASL season.

But, be clear; that’s not an end goal. It’s a starting point.

“The truth is, you don’t get very far on 1,000 tickets,” said Tom Fath, who owns the team with his brother, Dave. Truth is, FCE has not set a hard target of tickets that have to be sold. Fath said it will be a combination of tickets sold, corporate support and the right agreement for a soccer facility that will help convince him and his brother to re-launch the pro team, but in CanPL this time.

“Dave and I need to know it will be sustainable,” said Fath. “We have to be convinced it will be different (than it was in NASL).”

Fath told the fans in attendance that he was first approached by the CanPL three years ago — and that he’s been attending meetings over the last year. Ball is landing in Toronto Thursday morning for the next round of  CanPL meetings.

“The fans want FCE in the CanPL,” said Fath.

But, will it happen? Fath needs to see a groundswell of support from fans over the next month. Every Friday in March, there will be an event that helps increase the visibility of soccer. Next Friday, at Arcadia, the YEG for CPL group will launch a co-branded beer with Sea Change Brewery. There will be more rallies and events to dot the March calendar.

“March has to be the most exciting 30-day window in the history of the club,” said Ball.

To help rally the fans, academy coach Jeff Paulus (the academy is still running, though the pro team is shuttered at the moment) and FCE player Allan Zebie spoke to the crowd.

Paulus said that the CanPL will make sure domestic players “will have a home, that they will have a goal.”

He said the team’s survival ensures the continuation of the academy, which has produced players such as Shamit Shome and Amer Didic, who have gone on to sign MLS contracts. But Paulus said that we can’t forget the Faths have also bankrolled the girls’ REX program, which has a great track record of sending players on to scholarships.

“One hundred per cent of our players receive a full ride, typically,” he said.

Zebie, whose family moved to Canada from France when he was 9, played for both thre Quebec and Alberta provincial teams before moving on to FCE’s academy, then to the pro side.

“I believe FCE is so important to this city, to this country,” said Zebie, who appeared in 54 matches over three NASL seasons with the Eddies.

Nathan Terlesky, one of the organizers of the YEG for CPL group, said that the group exists to “open people’s eyes to what soccer can be in Edmonton.”

Now, he and his fellow YEG for CPL members have to do more than open people’s eyes. They need to convince Edmontonians to open their wallets. The clock is ticking.

But Ball’s enthusiasm, for at least a few hours, erased the doubts.

“In 18 months, it will be the end of the first CanPL season, in either October or November… And this is what I see as the headline in the Journal: After seven years of toiling in NASL, after 18 months of going dark, after the fans came back to save the club, FC Edmonton wins the first Canadian Premier League.”