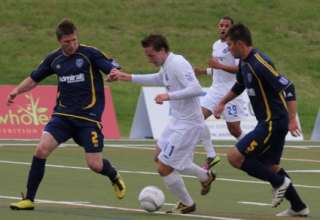 Paul Craig takes on the Minnesota Stars in 2011 action

Paul Craig scored the final goal of FC Edmonton’s season, a last-gasp strike that gave the Eddies a 2-2 draw against Fort Lauderdale.

For the Prince Edward Island native, it would also be the last goal he’d score for the Eddies — period. Craig was one of four players whose contracts won’t be picked up by the club for the 2013 season. The club announced the moves on Tuesday. Also on the outs are midfielder Dominic Oppong, defender Adam West and fullback Dino Gardner.

As well, the club announced that the loan for Chilean striker Yashir Pinto will not be renewed. Pinto came from Colo-Colo, and the team had high hopes he’d be one of the top scorers in NASL. But, after immigration-paperwork issues held him out of the first road trip of the year, he had a bright start at home. And, then, his confidence vanished, and he began to stab at the ball in front of goal. He never recovered, and finished the year with just three goals in NASL play, plus one against the Whitecaps in the Amway Canadian Championship.

With Pinto and Craig both out of the team, it’s a sign that FCE is looking to make room for a new striker or strikers. The 11 understands that the front office is actively looking to make a splash by bringing in a proven goal-scorer into the fold — but no player has been signed of yet.

Gardner, a former TFC Academy prospect, was signed in the middle of last season, but didn’t make the impression the team had hoped.

Oppong had been with the team for two years, and played the holding midfield position. But, in 2012, he was relegated to being a depth player, seeing some time as a substitute but falling behind Bryan Arguez and Kenny Caceros on the depth chart.

West suffered from hamstring issues for most of the season, and really only got a chance to play once FCE was eliminated from the playoff race.

The team did announce that the options were picked up on three of the goalkeepers who were in Edmonton last season: Lance Parker, John Smits and David Monsalve. Michal Misiewicz, the team’s fourth keeper from 2012, was released at the end of the season.