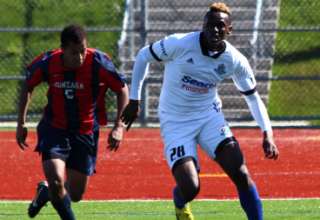 Andy Ramos was supposed to be the “project” third keeper for FC Edmonton this season, learning the ropes of North American pro soccer while playing behind Lance Parker and John Smits.

This was supposed to be the year that Yellowknife’s Dillon Torindo was going to get his shot that he could do more than succeed in semipro African soccer or at the Canadian senior amateur level. After coming to FC Edmonton’s fold on the recommendation of the Portland Timbers, the big midfielder looked like he was going to stick with the Eddies in 2013.

Instead, the Eddies chopped Torindo and are now in the marker for a third keeper. The team announced Wednesday that Torindo and Ramos had been waived. Two more players were added to the roster: Defender Adrian LeRoy and midfielder Edem Mortotsi.

LeRoy’s signing has been expected. He got the start in FCE’s final preseason match of the season, and an MCL tear suffered by captain Albert Watson in training camp has left the Eddies short in the middle of defence. LeRoy could actually see more minutes in Saturday’s season opener than he did in all of the 2011 season, when he was a seldom-used utility defender for the Eddies before he was cut at the end of the season. But LeRoy impressed enough at the 2013 NASL combine to earn another shot with the Eddies, and the Ottawa native now looks to be a big part of the team’s plans going forward.

Mortotsi has had a good camp and makes the move up from the Reserves to the big club. The Ghana-born midfielder is the third player who spent time under coach Jeff Paulus at NAIT to make the move to FCE’s senior squad, joining Mallan Roberts and Chris de Guise. Paulus became the head coach of the FCE Reserves and an Eddies’ assistant after he led NAIT to an undefeated season and a Canadian college championship two years ago. He said when he was hired that he felt there was talent in the college ranks who could take their best shots at playing pro soccer in Canada. Now, in 2013, three of the Ooks alumni are Eddies.

The Ramos scenario is especially interesting. With less than a week to go before the start of the regular season, this leaves FC Edmonton with just Parker and Smits with pro experience. The team cut ties with Michal Misiewicz and David Monsalve during the offseason. Because of the injury crisis the team ran into in 2011, the club was forced to use amateur keeper Justin Ammar after all of the pro keepers on the team went on the shelf. After that happened, director of soccer Joe Petrone vowed not to be caught short at the keeper position again, and FCE went into 2012 with two former MLS keepers in Monsalve and Parker, the best keeper in CIS in Smits, and the U-23 star in Misiewicz.

Now, the Eddies are back to two keepers after Ramos was let go.

The Cuban keeper played in a World Cup qualifier last year for his country, but came to Canada legally because he has family here. He previously said he wanted to stick with the Eddies but also wanted to remain loyal to the Cuban national program, which doesn’t recall players once they play outside of the island nation’s “amateur”
league.

Ramos was considered a very raw prospect who would need a lot of time in reserve matches. But the Eddies were bullish about his upside — shot-stopping ability and size. But, now the Ramos dream to play pro soccer in Canada looks to have ended.