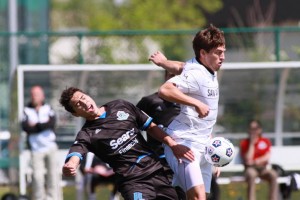 FC Edmonton’s continuing inability defend set pieces transformed what should have been a win into a draw at Clarke Stadium on Sunday.

San Antonio defender Aaron Pitchkolan was unmarked and had a fairly easy time heading in a free kick from Hans Dennisen, allowing the Scorpions to escape Edmonton with a 2-2 draw.

“We showed a lot of heart,” said Pitchkolan. “We came through in the second half and dug out a result.”

Minnesota’s winning goal in Edmonton came off a set piece. San Antonio scored last week against Edmonton on a set piece. And it’s become a disturbing, broken record with the Eddies. Today, the Eddies tossed two points away despite a maestro performance from midfielder Shaun Saiko, who made an inch-perfect cross to Yashir Pinto for the opening goal and then scored himself to make it 2-0.

But, despite having a two-goal lead with less than half an hour to play, the Eddies imploded.

With a U.S. Open Cup match against Houston on Tuesday, Scorpions coach Tim Hankinson left a lot of strength on the bench for the game against Edmonton. Striker Pablo Campos started the game on the bench; defender Ryan Cochrane didn’t play. And Canadian midfielder Kevin Harmse was left out, too.

And the Scorpions players that did play started off tentatively, putting no pressure on the Eddies’ defenders, and choosing to defend more deeply than any visiting team we’ve seen come to Edmonton since the Eddies came into NASL.

FC Edmonton keeper Lance Parker, who made his first start since suffering a compound fracture in his arm last June, did not have to make a first-half save. Edmonton has now used all four keepers on its roster through the first eight matches of the NASL season.

With San Antonio playing what looked like a very deep-lying 4-5-1, FCE pressed forward, knowing that the lone threat of an isolated Esteban Bayona posed no threat.

Saiko forced keeper Darryl Sattler into a good save early in the match, with a free kick that just missed the head of Pinto — and it made it awkward for the keeper, who couldn’t overplay the shot, knowing Pinto might get a touch.

Striker Paul Craig, making a rare start, then had the ball in the back of the net off a perfect cross from Saiko, but the goal was ruled out for offside.

But FCE finally got the lead it deserved, as Saiko delivered yet another perfect cross into the box, with Pinto’s glancing header placing it inside the post.

Hankinson, said that the discussion in the Scorpions locker room was rather animated. He was disappointed that many of the reserve players he brought in didn’t seize their chances — and he let them know about it.

“It was a volatile locker room(at halftime),” he said. “The guys needed to be shaken up.”

But even with the team talk, FCE kept coming in the second half, and San Antonio’s back line was static as Eddies midfielder Ilja Van Leerdam took the ball down the left side and laid off a perfect ball for Saiko to hammer home, giving the Eddies a 2-0 advantage.

“The defenders stayed off me, which was a little unusual,” said Saiko, who himself was surprised about the space he had to finish the chance.

Now, with Josh Simpson out long term with a broken leg and ankle, and national-team coach Stephen Hart needing to add a player to the roster, would it not hurt to bring in Saiko, who has a lethal shot from anywhere within 35 yards, and who can play wide? Yes, Saiko is a second-division player, but with his ability to cross the ball and deliver free kicks, would that not be something an offensively challenged Canadian side could use… even off the bench?

But, with Edmonton up 2-0, Hankinson switched to a 4-3-3 and Dennisen was brought in. Quickly after the shift, Josue Soto made it 2-1, after he stroked home a low cross from Walter Ramirez. Edmonton’s back four were in good shape, but no midfielder tracked Soto’s run to the top of the box.

“They brought in some subs and played a little different,” said FCE coach Harry Sinkgraven. “We lost control in midfield.”

Saiko then hammered a free kick from 30 yards out that was labelled towards goal, but Sattler made an outstanding leap to tip it over the bar.

That could have been the chance to end the game, but instead Campos came in as a sub and San Antonio kept up the pressure, which resulted in the set piece that tied the game.

“We’ve got a young squad, we’ve got to learn from this,” he said.

“But you have got to get three or maybe four. You have to give the fans something to cheer about.”