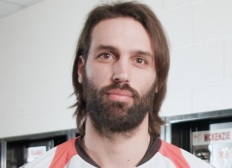 In the blue corner is FC Edmonton coach Colin Miller, who spent three years at Scottish giants Rangers, and who still has a strong connection to the famous club.

In the green corner is Georgios Samaras, who scored 53 career Scottish Premier League goals for Celtic.

Samaras recently signed with NASL expansion side Rayo OKC, which will play its first-ever regular-season home opener Saturday. The Eddies will be in Oklahoma. The Eddies are the league’s team of choice when it comes to being the opposition for the expansion teams making their debuts. Remember that Jacksonville scored just 12 seconds into its NASL opener against the Eddies in 2015.

Samaras will be wearing OKC colours, but Miller still remembers his exploits in the green and white hoops. And green and white, to Miller, is like waving a red flag in front of a bull.

“I can assure you, (captain and centre back) Albert Watson won’t need any motivation, either,” said Miller. “I actually just spoke about it (with the team). Samaras has had a terrific career but, he doesn’t necessarily like the rough stuff. So, we’ll introduce ourselves to him on Saturday.”

FCE will have Shamit Shome, who was with the Canadian U-20 squad that beat England, on the trip to Oklahoma City. Nik Ledgerwood, on national-team duty with Canada, and Dustin Corea, who is with El Salvador’s national side, will join the Eddies in Oklahoma.

The Eddies will also be moving to a 4-4-2 formation. That might change when the subs come in — depending on the score. But, at kickoff, then Eddies will move away from the lone-target-man setup that they’ve used heavily the past couple of seasons.

”We’ve played 4-2-3-1 and 4-1-4-1 over the last couple of seasons,” said Miller. “And, you see the game changing now — things, trends, fashions. But I want to see two players further forward for us. Whover that is, if it’s (Daryl) Fordyce and (Tomi) Ameobi or (Jake) Keegan, it doesn’t matter at this point in time, I’d like to see someone else other than one target front player. I want to see support get up to him much quicker.

“I’m asking a lot of the midfield four and the front two from a defensive point of view, but our fitness levels will hopefully determine that.”

And, Miller said that if the best Cinderella story in the world of soccer has built itself on the 4-4-2, it’s good enough for the Eddies.

“The best example we can use of 4-4-2 at the moment is Leicester City. And if it’s good enough for a club that’s at that budget to play against clubs that spend upwards of 300 million pounds on their teams, and to be top of the English Premier League, I don’t think anyone can argue with that.”