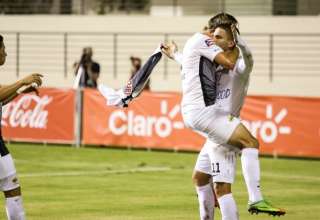 Entering Saturday night’s game against FC Edmonton, Puerto Rico FC was at the bottom of the NASL table, winless in nine matches. New coach Marco Velez, a former Toronto FC defender, was still searching for some evidence that the team’s fortunes were changing.

Well, thanks to a goal and an assist to Giuseppe Gentile, and some poor FC Edmonton defending, PRFC got its first win in blowout fashion. PRFC beat Edmonton 3-0, destroying any kind of momentum the Eddies thought they might have built with last weekend’s win over the Indy Eleven.

FCE coach Colin Miller called it “arguably FC Edmonton’s worst performance” since he took over as the team’s coach ahead of the 2013 season.

“The buck stops with me,” said the coach. “I’m big enough to accept that when things go like that, it’s a reflection on Colin Miller.”

Miller apologized to FCE’s fans and ownership for the team’s performance on the night.

“No player got a passing mark tonight.”

While Velez has preached playing shorter passes on the ground and leaving the physical, direct game behind, the scoring was opened thanks to route-one soccer that was aided and abetted by some poor Eddies defending. In the 25th minute, a long ball was hoofed up the field for striker Giuseppe Gentile, who then dashed at a line of four FC Edmonton defenders, dashed around centre back Albert Watson and then beat keeper Chris Konopka with a poor-angle, near-post shot.

Three minutes later, the hosts doubled their lead. FCE’s Dustin Corea gave the ball away, and that turnover set Puerto Rico FC off on a counterattack. Eddies Mauro Eustaquio and Pape Diakite both missed tackle attempts, which allowed Gentile and Hector Ramos what amounted to a two-on-one break, with only Watson left to foil the scoring attempt.

Gentile slotted a square ball to Ramos, and then the ball went into the net.

FCE coach Colin Miller made two changes at halftime, bringing out fullback Netan Sansara, replacing him with Karsten Smith. And forward Jake Keegan was brought in while Eustaquio was taken out.

Eustaquio got the start in place of the injured Nik Ledgerwood, who is nursing a calf problem. Miller said Ledgerwood, FCE’s captain, will be out of Wednesday’s match against the New York Cosmos.

But, two minutes into the second half, Konopka had to dive to keep Jairo Puerta from making it 3-0.

“We weren’t at the races against a team that’s at the bottom of the table,” said Miller. “All respect to Puerto Rico, but they didn’t look like that tonight.”

It would only take until the 52nd minute for Puerto to get his goal, though. It came on a spectacular, curling effort that hooked inside of Konopka’s far post.

Corea, who had a goal and an assist last week,  made his exit in the 63rd, with Sabri Khattab entering in his place. Miller said all three of his changes were tactical. No one was hurt or needed rest.

PRFC, who opted not to wear the familiar orange kits at home, got a four-on-two break in the 67th, but Gentile’s shot found Konopka’s midsection. The keeper then stretched to deny Gentile in the 70th, as the one-way traffic pattern continued.

But the score would remain 3-0, and now the Eddies have an awfully short turnaround ahead of the midweek game at the Cosmos.

“If we got to New York and play like we did tonight, it can be double figures,” Miller warned.