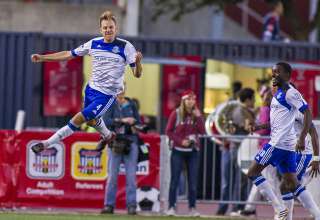 Thanks to injuries and suspensions, Neil Hlavaty regained his spot in FC Edmonton’s starting 11.

And, his spectacular free-kick goal allowed the Eddies to draw the Indy Eleven 1-1 Saturday night in Indianapolis. Hlavaty also came oh so close to scoring what would have been a match winner in the second half with another free kick. But, Indy keeper Kristian Nicht dove to make a fingertip save.

“It’s not just the free kicks, I thought Neil played his best game of the season for us tonight,” FCE coach Colin Miller said after the match. “And it’s not a fluke, he practices those free kicks every day.”

Hlavaty’s free kicks weren’t the only bright spots for the Eddies; so was the play of the makeshift back four. With right back Eddie Edward suspended, youngster Mallan Roberts got his first start at centre back since the spring season, while centre back Beto Navarro moved to Edward’s spot on the right. Kareem Moses (left back) and Albert Watson (centre back) held their regular spots.

In fact, outside of Hlavaty’s free-kick equalizer, the two best offensive chances the Eddies created came from the back line. Off a corner, Navarro’s sneaky back-heel effort forced Nicht into a sprawling save. Off another corner, the ball came out to Watson, whose off-balance volley crashed off the post.

Yes, the Eddies gave up a goal, but that couldn’t be pinned on the defenders. The blame on that falls to keeper John Smits, who was back in goal after Lance Parker couldn’t recover from a shoulder injury suffered in last week’s loss to San Antonio.

Indy’s Sergio Pena took a shot from outside the box that was aimed right at the centre of goal, and towards Smits’ bread basket. The ball took a bit of an awkward bounce, but one that a pro keeper has to handle. Smits couldn’t control the shot; the rebound bounced to Victor Pineda, whose bicycle kick found the back of the net. Full marks to Pineda for the finish, but the ball should never have got to him.

“Smits put up his hand after the game, he’s such an honest player,” said Miller. “But, I have to say, he did play very well for us after that, had a very good second half.”

Parker was out. Edward and midfielder Cristian Raudales were missing due to suspensions. Striker Daryl Fordyce is still coping with tendinitis in the heel and Ritchie Jones was hurt last week in San Antonio. With five men out, Miller saw the draw in Indy as a glass half-full.

“We were down five starters and I thought we played very well overall. I am going to look at this as one point gained rather than two points dropped.”

After Saturday’s action, the Eddies remained four points out of fourth place in the overall standings, and the NASL’s final playoff spot. The only thing that changed is the team the Eddies are chasing. After Tampa Bay’s loss to Ottawa and Carolina’s win over San Antonio, it’s now the RailHawks who occupy fourth.

The Eddies are expecting a big crowd for next week’s home date to the Rowdies. Reports are that tickets are more than 95 per cent sold.