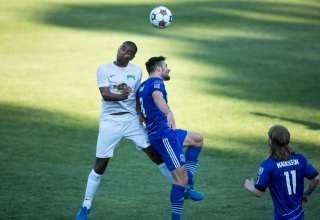 Ritchie Jones is seen in action against Tampa Bay.

Three down, one to go.

After routing Jacksonville United 6-0, losing to Tampa Bay Rowdies 2-1 and settling for a 0-0 draw with the Carolina RailHawks on Saturday, FC Edmonton has just one last preseason game left on its schedule.

And while no coach will confirm or deny what the starting XI will be ahead of time, there’s a feeling that Tuesday’s preseason curtain-closer against Jacksonville United might give Eddies fans a closer idea of what the lineup will look like when Colin Miller and his troops begin the NASL season April 4 in the first-ever home opener for the expansion Jacksonville Armada.

Playing against JU, a team that likely won’t be out to kick the Eddies, the team can work on the few things ahead of the season opener.

Miller, said his team is impatiently waiting the start of the regular season. This is the third week the team will be spending in Florida ahead of the season opener, after spending three weeks indoors in Edmonton.

“The guys are gong 100 miles an hour and we’re just all waiting for the season to start. We’re ready. I can’t imagine what it’s like for the teams that have been in camp for eight or ten weeks.”

The Eddies and RailHawks drew 0-0, and Frank Jonke finished a Lance Laing free kick late in the game in the 2-1 loss to the Rowdies. Jonke also had a chance ruled out by the offside flag and Ritchie Jones failed to convert a penalty kick.

The bright side: Keeper Matt Van Oekel, acquired in the offseason, still has not surrendered a preseason goal.

Ironically, the Eddies went down to Florida so they could get some NASL-calibre preseason matches in; and, as well, to get acclimated to the steamy un-Alberta-like conditions ahead of the season opener. But the weather hasn’t been steamy.

”The weather has been bad,” Miller said on Saturday. “This morning, we’re seeing puddles all around, it’s supposed to get to 18 or 19; it has been un-Florida like.”

Anyone who watched Friday’s stream of Canada’s win over Guatemala in Fort Lauderdale saw that the teams were playing in gale force winds. Ironically, on that day, temperatures in Edmonton were over 15 C, sunny and barely any wind.

Miller said that while there were a couple of players nursing knocks, the team should be healthy for the opener against the Armada.