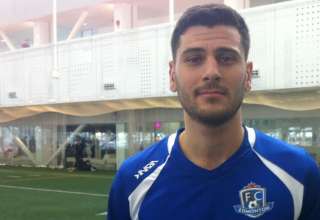 FC Edmonton’s players went through the paces Thursday at Commonwealth Fieldhouse in their first public training-camp session of the new campaign.

Pape Diakite, who was 2016’s NASL young player of the year, was on the pitch just minutes after confirmation came that he would return to the Eddies for the 2017 season.

And the team was in their new Inaria training kits. The team announced a deal with the Canadian sportswear manufacturer on Thursday. The team has worn Adidas jerseys since the 2012 season, but will move to Inaria apparel for the 2017 season. The team’s new kits will make their debuts in the weeks to come.

The team has already brought in newcomers Chris Konopka in goal, along with midfielders Mauro Eustaquio and Sabri Khattab, and defender Netan Sansara.

Coach Colin Miller said there is still some new blood to come.

“There’s still one or two players to come in, who will be attacking options, as well,” Miller said after the team’s session. “At least one. I don’t want to have a squad that’s so big this season where the last player doesn’t get a chance to play, he doesn’t see a light to get a chance to play.”

The Eddies set an NASL record last season for fewest goals conceded. Keeper Matt VanOekel set the league record for clean sheets in a season, and was rewarded with a contract from Real Salt Lake of MLS.

Chris Konopka, who was the starter for the majority of Toronto FC’s games in 2015 before heading to Ross County and the Portland Timbers, takes over as the favourite to replace VanOekel, with Canadians Tyson Farago and Nathan Ingham also vying for the top keeper’s job.

“It’s fantastic,” Konopka said. “I have the opportunity to come up here and hopefully win a championship with these guys, it was a great draw and a great opportunity for me.”

“Chris comes in, he’s been an experienced backup goalkeeper in MLS,” said Miller. “He’s been there and bought the t-shirt at that level of football. He’s played in Scotland as well. I just felt he was available, that he wanted to come to establish himself as a first-choice goalkeeper and he’s going to be under pressure from Tyson and Nathan.

“He hasn’t played thousands of games for the first team, we know that. But he’s been at a very, very good level of football for a long period of time.”

Miller said he spoke to three goalkeeping coaches who have worked with Konopka in the past and received very positive feedback.

“I’ve said it before, I’ll say it again, a good goalkeeper is worth 12 points in the season,” said Miller. “Matt VanOekel was 12 points for us, so, definitely big gloves to fill for Chris or Nathan or Tyson or whoever that player is.”

Konopka said he’s relishing the chance to be a No. 1.

“Last year I had a different year from the year previous; I was the number one in Toronto, then last year I had an opportunity to go abroad and play in the Scottish Premier League, which was a great opportunity for myself. But, I didn’t really get the opportunity to play there much or in Portland. So, obviously the draw here is to come up and be the guy and to prove week in and week out that I should get the chance to play is what everyone wants to do.”

Konopka and Ingham know each other; Ingham and Konopka trained together in Toronto.

Sabri Khattab doesn’t know a heck of a lot about Canada. The midfielder is a Norwegian league veteran, but spoke to his agent in the off-season about wanting to “try something new, something different.”

The Eddies definitely offer something new. For Khattab only familiar face on the team belongs to Netan Sansara, who he played against in the Norwegian league.

He could have stayed closer to home, but decided against it.

“There were other offers in Scandinavia, but I wanted to try something else.”

Khattab’s girlfriend and their twin sons will join him in Edmonton after the Eddies return from their two-week preseason trip to Manchester.

Khattab said that he’ll take on whatever role Miller has in mind for him, but attacking central midfield is his preferred spot.