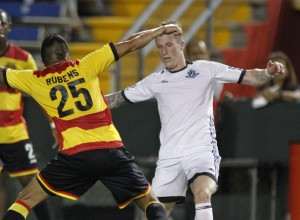 Wes Knight in action earlier this season against Fort Lauderdale.

After 10 days off, FC Edmonton’s first team was back on the pitch Monday, as the players embark on their second training camp of the year.

The NASL fall season begins the first weekend of August. The addition of the New York Cosmos will bring the league to eight franchises. And the Eddies feel that they aren’t that far from being a contender for the fall title. FCE finished seven points behind eventual spring-season champions Atlanta. But FCE had five draws on its ledger; turn three of those draws into wins, and the Eddies would have been there on the final spring-season weekend.

Finding the goals to turn draws into wins is a priority for the team, but there were no new faces at training sessions Monday at the Commonwealth Fieldhouse. Assistant coach Jeff Paulus, who ran the training sessions, said new players would be brought in next week, after the team returns from a week-long training trip to the Twin Cities. That jaunt includes two friendlies with Minnesota United FC. The first goes Wednesday night, and the second is a closed-door affair set for Saturday.

“We will just be taking our current players to Minnesota,” said Paulus, who led the session with coach Colin Miller still on his way back from Denver. Miller just wrapped up his head-coaching duties with the Canadian national team at the Gold Cup.

But while there were no new faces at the Fieldhouse on Monday, two additions could soon be made to the roster that will feel like signings. After he has completed his Trinidad and Tobago duties at the Gold Cup, defender Carlyle Mitchell is expected to return to Edmonton.

Mitchell had played every minute of every NASL match this season for the Eddies until May 26, when he turned his ankle on the Clarke Stadium turf. The centre back was then recalled by his parent club, the Vancouver Whitecaps, in June. But now that the Whitecaps’ defensive line has stabilized somewhat, Mitchell is expected to start the fall season with the Eddies.

And, defender/midfielder Wes Knight, one of the club’s most high-profile off-season signings, is bullish about his prospects of being ready for the Eddies’ fall-season opener. Knight broke his foot in an April match in Minnesota and missed most of the spring season.

Knight said he’s expected to be cleared to play by doctors on Friday, and then it will take two weeks to get back to full fitness. He hopes to be ready for selection for the fall-season opener in Carolina.

“This has to be the most frustrating season I’ve had. But, as frustrating as it has been for me, it has been a great learning process. I think I have learned to become a better teammate, to be able to help the players with the mental part of the game, because that’s pretty well all I could do.”

Knight said that, though the team is frustrated to finish seven points behind Atlanta, there were bright spots in the season that showed the potential the Eddies have. He pointed to the opening leg of the Nutrilite Canadian Championship semifinal, which saw the Eddies outplay the MLS Whitecaps, but ended up losing 3-2 after the match turned on a controversial penalty call.

“If we could play for the majority of the season like we did against the Whitecaps and, if I could be a part of that, I think we could be a contender. We also played very well against Atlanta (a 3-0 win at home and a 1-1 draw on the road, despite the Eddies being down to 10 men). If we did that well against the eventual spring champion, then that should give us confidence for the second season. The parity in this league is exciting; we started off against a tough Fort Lauderdale team, they looked like a legitimate team, and they slipped into last. San Antonio was near the bottom for most of the season, then they finished very strong and they were there on the final weekend.”

To contend for the fall-season title, the Eddies will need to find goals. And we’ll find out next week who the new striker candidates will be.