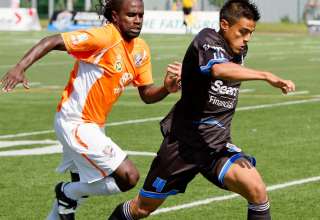 The playoff race is officially on.

FC Edmonton narrowed the gap to four points between itself and the Carolina Railhawks for the final NASL playoffs spot with a 1-0 home win Sunday over an undermanned and overmatched Puerto Rico Islanders side.

A wonder goal from Shaun Saiko — returned to the starting lineup after spending two matches in coach Harry Sinkgraven’s doghouse — was the margin of victory. But FCE missed a series of wonderful chances that should have put this game out of reach early into the second half.

“We’ve got a lot of confidence, we are undefeated in three games,” said midfielder Bryan Arguez, who put in a man of the match performance in the centre of the park, winning ball after ball and being calm, cool and collected in possession and distribution. “We are going to make an excellent push to make the playoffs, and this is a critical first step.”

Because of upcoming international friendlies, Islanders coach Adrian Whitbread was without 10 players for Sunday’s match at Clarke Stadium, including influential regulars Noah Delgado and Richard Martinez. The Islanders brought just 14 players to Edmonton for the match. Meanwhile, despite the team playing its third match in eight days, Harry Sinkgraven started the same back four that played Wednesday against San Antonio — with David Proctor and Chris Kooy in the middle of the line.

Paul Hamilton’s one-game suspension for last weekend’s head-to-head collision with Minnesota Geison Moura was served on Wednesday, but he was held out today because he was still feeling the effects of the impact, though FCE staff were careful not to use the “concussion” word in describing his condition.

Early in the match, the game was brought to life by the game’s two old friends from their days with the Ottawa Fury. FCE’s Kenny Caceros made some solid plays down the right wing, which Islander defender Edson Edward made a few daring runs from the fullback position. The two are close friends — and looked to bring the best out of each other.

And, Caceros, hobbled after a late challenge from Osei Telesford, was the creator of the deciding goal. Arguez rode two challenges to create space in the midfield, then played the ball outside to Caceros, who delivered an early cross into the box.

Saiko, running across the top of the box, got to the and pushed the ball to the ground with his right foot. He twisted as the ball bounced off the turf, then swung that same right foot through a ridiculous volley that flew into the top corner.

But, right after the goal, Caceros had to come off due to the injury, replaced by Matt Lam.

The win saw Edmonton burst forth with confidence; the Eddies were unlucky not to be up two before the half, as a Saiko free kick deflected off the Islanders’ wall and off the woodwork. Kyle Porter flew at the rebound, and Islanders’ keeper Richard Martin dove across the goal to make a remarkable save, the first of many for the Englishman.

The Islanders were also lucky to remain at 11 men. Before the half, midfielder Chris Nurse brought his foot down on FCE defender Kevin Hatchi, who was laying on the ground. When Nurse was pulled aside, the referee had a red card in his hand; but, after some sober second thoughts, the red card was put away and a yellow was shown, instead.

The second half saw the Eddies launch attack after attack on goal. Really, the last few minutes of the match should not have been nervy, as FCE showed why the team averages less than a goal a game.

After Martin and defender Christian Ibeagha ran into each other, Saiko took the ball and rounded them — and placed his shot at an open goal off the post. The rebound came to Serisay Barthelemy, who also should have scored. But his chance was blocked by Edward, sprawling in the box. The rebound fell to Saiko, giving Edmonton its third point-blank chance… and he put a shot past the post.

Arguez forced Martin into a fantastic save, palming a shot from the top of the box over the bar.

Saiko was then sent in behind the defence thanks to a well-placed lob from Lam; but the backspin on the ball forced Saiko to slow down to control the ball, and Martin had time to come off his line and deny the chance.

Antonio Rago, who had another dominant game at right back, almost created a goal after he won the ball from Islander Pari Pantazopoulos with a sliding challenge, then got up and split the defence with a perfect ball to Barthelemy. But the French FCE attacker wasn’t able to get his shot over or around Martin, who had charged off the line.

“In the second half, we made it difficult for ourselves,” said Sinkgraven. “We had many opportunities to score the second goal.”

But, the back four didn’t buckle, and FCE wasn’t forced to pay for wasting so many chances in a game it deserved to win by three or four goals.

FCE plays Carolina next weekend — and can reduce the gap to one point with a win. As well, the Minnesota Stars, in fifth, are just six points ahead of the Eddies. FCE and the Stars still have to face each other twice before the end of the season.