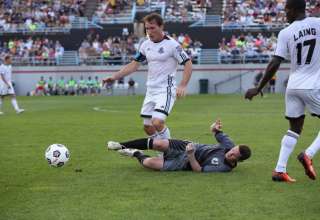 If you are going to gamble on NASL scores, putting some money down on FC Edmonton playing its opponent to a 1-1 draw is a pretty safe bet.

For the fourth week in a row, that was the final score. But FCE coach Colin Miller will see it as two points dropped in Minnesota; the Eddies had to settle for a single point despite the fact that Minnesota United FC only had 10 men on the pitch for more than half an hour.

“Just because you are up a player does not give you a divine right to win a game,” said Miller.

Sinisa Ubiparipovic, on loan from the Montreal Impact, was sent off in the 61st minute, just two minutes after coming into the game as a sub. After being tackled by FCE’s Chris Nurse, Ubiparipovic, while on the ground, drove his cleats into the Eddie’s chest. Nurse had already raised the ire of the Minnesota players after Lucas Rodriguez was sent sprawling to the pitch from a clean but very tough challenge earlier in the half.

That set the stage for a wild exchange of goals. In the 75th, the Eddies were punished for lax defending on a corner, and the 10-man home side took the lead. Cristiano Dias converted a cross from Miguel Ibarra. Dias was left unmarked and FCE keeper Lance Parker had come out of the goal to get to the cross, but didn’t get there.

“We definitely didn’t defend the corner very well,” said Miller. “And that’s something we’ve prided ourselves on all season. We will look at the video and see what went wrong.”

The goal began a strange sequence for Dias, who wore the goat horns for a series of defensive miscues in a 3-1 MUFC loss to the Eddies in the final game of the spring season.

Right off the ensuing kickoff, the Eddies got the ball down the right side, and Rago beat Dias cleanly. He was able to get a low cross in to striker Corey Hertzog, who got just enough of his foot on the ball to nudge it across the line. With the celebratory smoke still wafting across the pitch, the Eddies had tied the game.

Rago started at right back in favour of Edson Edward, who picked up a knock in training Friday just before the Eddies were scheduled to get on the plane to Minnesota.

“Antonio does some very good things,” said Miller. “And there are some things that he has to work on in his game. He definitely has to work on his positional play. But he is good on the ball and coming forward, which is what we talked about before the game. He is quick. He wasn’t even on the 16 who was supposed to fly here, but then Eddie had to pull out and Antonio ends up playing. So I thought under the circumstances he did very well. If he can work on some of the problems with his game, I think he’s going to be a very good fullback in this league.”

The Eddies then pushed forward, trying to find the winning goal. Their best chance came in the 89th, when Nurse’s effort found the post. Had the ball been a few inches over, Nurse would have had his fourth goal in four games.

In the first half, the bulk of MUFC’s attacks were engineered by Calum Mallace, as the midfielder, also on loan from the Impact, sat behind the strikers and tried his luck several times from just outside the box. Mallace also played a clever through ball for striker Mike Ambersley, but Parker read the play and came screaming off his line to get to the ball just before the forward.

Hertzog had a great chance to open the scoring in the 23rd minute; he was wide open at the back post to meet a cross from Robert Garrett, but looped his header over the bar.

Right before Ubiparipovic was sent off, the Eddies got a scare when MUFC striker Max Griffin slammed the shot in the back of the net. Ambersley played the ball on the left for Dias, who quickly crossed the ball for a streaking Griffin to finish. But Dias was in an offside position when he took the pass from Ambersley.

The Eddies now return for home games Sept. 15 and 22, with the Fort Lauderdale Strikers and then Minnesota United coming to town.

“We are now five games undefeated, and that’s a good feat at any level of football,” said Miller. “We now have two very bog games at home, and that’s a very big six points that is on the table.”