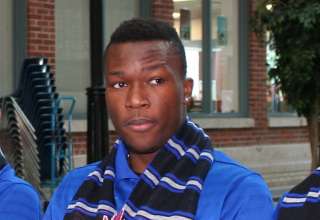 A day after FC Edmonton’s reserve match against Scottish was abandoned after 35 minutes because of an on-field incident, there is no word of suspensions or repercussions.

FC Edmonton’s Mallan Roberts received a yellow card after a head-on-head collision that kicked off a melee between the two teams.

“We were up 2-0 and there was some disagreement from their side about the penalty kick we just had for the second goal,” said Reserves coach Jeff Paulus. “The cross came in and, if you have seen Mallan play, he is a beast of a defender. He went up for the ball and, to be fair, the Scottish player got there first. Mallan arrived half a second late, and the other player was split open.And, depending on what angle you saw it from, it looked to some of the Scottish players like Mallan had used his elbow. I don’t blame the Scottish players for reacting the way that they did. They just saw a teammate injured.”

“Split open” is correct. The Scottish player in question, Vince Bustamente, said he suffered a concussion and the gash required eight stitches to close.

Mallan received a slap in the face and then keeper Michal Misiewicz came to his defender’s defence, and punches were thrown. While Paulus believes the two fighters got red cards, he hasn’t seen the match report.

Scottish features former FC Edmonton forward Chris Lemire and defender Chris Devlin, a former Edmonton Aviator and co-coach of the Edmonton Drillers than won the CMISL indoor title this spring. Bustamente is a Driller. There are plenty of ties between FC Edmonton and players in the Scottish lineup, which made this incident so odd.

But Paulus singled out Devlin for helping calm things down, for acting as a peacemaker between the teams. And, after the match, the teams had no incidents in the dressing room.

After the incident died down, the referee chose to stop the game, despite not handing out a red card. It was a decision that reserves coach Paulus endorsed via Twitter on Wednesday night.

“The ref did not feel he could regain order and called the game. A decision I agree with,” he tweeted.

FC Edmonton’s reserves features a roster filled with teen prospects. And, in a game against a men’s team that has bad blood, safety for the young players takes priority. It’s a product of the system; the games do not count in the standings. FCE Reserves plays what amounts to an exhibition schedule against clubs from the Alberta Major Soccer League. For the most part, FCE wins the matches, and many times those wins are by fairly large margins. So, you can have situations where the AMSL veterans feels a bit upstaged by the kids.

Scottish is a very good side, and was down 2-0 when the incident happened.

But it’s also hard to mete out discipline, because the game is, technically, a friendly.

Paulus said it is “50-50” if FCE Reserves would return to this sort of schedule in 2012; and he said the AMSL teams hold the cards, as they can vote to end the arrangement. The team could look at alternatives for scheduling its youth and reserve players in 2013.