February 01, 2023
9 New Articles
Home NASL & USL FC Edmonton FC Edmonton’s home finale features a loss on the field, and uncertainty off of it 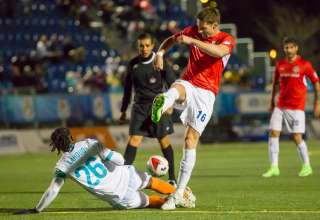 I’ve missed a total of one FC Edmonton home game since the team joined NASL in 2011. I’ve been to all the home openers, the season finales.

But Saturday’s game felt different than any other home-season-ender. We don’t know what the future holds. Heck, we don’t know in what league FC Edmonton will play in 2018, or if the team will play at all. Instead of “see you next year,” the handshakes with the broadcast crew and the stadium regulars had a feel of “we’ll see you… sometime?”

Miami FC, the best team man-for-man that has played in NASL 2.0, won the game 2-0. The visitors put together a jaw-dropping 18-pass sequence that led to the opener. But, despite what was an entertaining game on the field, we were thinking more about what happens next. If NASL can gets the Oct. 31 court injunction it needs to survive, will FC Edmonton return in 2018? If the Canadian Premier League does come to pass, will FC Edmonton move there? And, gulp, is there a chance that this game against Miami FC is the final chapter in FC Edmonton’s history?

There’s a lot been said on message boards and on Twitter about where FC Edmonton will play next season, or if the team will play at all. A lot of “sources.” But, in the long run, the opinion of only one man matters — and that’s Tom Fath, who owns the team with his brother, Dave.

Before the game, Fath spoke to my broadcast partner, Gareth Hampshire, and me about the future of club. And he played things very close to the vest.

We asked him if FC Edmonton will be in the CanPL. Fath said he thinks the league will be good for Canada, but we’ll have to see what the future holds.

We asked if CanPL might launch in 2018 or ‘19. He said that’s up for the league to announce and he won’t comment on that.

We asked if NASL gets the injunction, would FC Edmonton consider returning for 2018? He said we’d find that out later, that he couldn’t comment specifically about that.  He said that he “thinks” NASL will be successful in U.S. court, and it’s clear he wishes the league well in its battle.

Finally, we asked the toughest question of all. Could this game with Miami be FC Edmonton’s final home game, period? Fath said he couldn’t comment on that.

So, no commitments, and no denials, from the person who matters most.

As for the action on the field, Miami FC took the lead just 10 minutes in. After a long passing sequence — we counted 18 passes — the ball came out to the right wing for Jaime Chavez, who squared the ball for a wide-open Stefano Pinho.

Dylan Mares, a player who has long plagued FC Edmonton, could have made it 2-0 when he was set up by a sidefooted no-look pass and then a backheel pass in the build-up, but he put his shot wide.

For all of Miami’s possession in the first half, the home side did look dangerous on the counter, and really should have tied the game before the first 45 minutes were up. Sainey Nyassi stripped Miami fullback Mason Trafford of the ball, and sent in a cross for Daryl Fordyce. But Fordyce slipped just as he was about to make contact; and though he had Miami keeper Daniel Vega at his mercy, Fordyce’s shot was high.

The Eddies, though, did their best to help Miami out in the second half with some rather charitable play in their own half.

First, Tyson Farago spilled a cross, leaving the ball at the feet of Miami midfielder Kwadwo Poku. But Poku, not realizing how much time he had, snatched at the ball and sent it over the bar. It looked to be a huge let-off for the Eddies until…

… just a couple of minutes later, FCE’s Nyassi made an ill-advised back pass into his own penalty area. The ball was gifted to Miami’s Michael Lahoud, who then nudged the ball into the path of Mares for a shot he couldn’t possibly miss. He didn’t: 2-0.

FCE tried to rally, and the Eddies thought they had a penalty when Nyassi went down in the box. He claimed he was pushed over by Miami’s Hunter Freeman,  but referee Juan Marquez shook off the penalty claim.

After the match, FCE coach Colin Miller said “it was a stonewall penalty.”

Edmonton teenager Abraham Dukuly was brought in as a late sub, and was sent off after receiving two yellow cards in quick succession. First, he was called for a dive after he went down in the penalty area, then he tackled Lahoud from behind.

After the game, Miller lamented another Eddies game filled with missed opportunities.

“It’s the final ball again. We’re giving as good as we’re getting,” he said.

But, in Edmonton, we are at the point where we’d even look forward to losses and disappointments. We just want to be able to look forward to some kind of soccer in 2018. And, right, now, the only thing we know is that… we don’t know a thing.