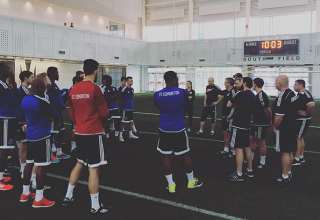 FC Edmonton’s second day of training camp — and the first held before the media — offered the first chance to see all of the team’s new signings.

With goalkeeper Nathan Ingham, defenders Pape Diakite and Adam Eckersley, midfielders Nik Ledgerwood, Gustavo Salgueiro and striker Jake Keegan in the fold — coach Colin Miller has made a lot of moves to re-make the Eddies, as the team looks to make the NASL post-season for only the second time in team history. And it’s not done; Miller said another signing will likely be announced in the next couple of days.

But, while the Eddies have made many changes, how will they stack up against the rest of the league? We have seen an influx of players into NASL, and the quality of play looks to be improving year after year. If someone has an idea of what it took to get to the playoffs in 2015, that standard is likely higher in 2016. Miami FC, Fort Lauderdale Tampa Bay, and Minnesota (including the signing of FCE’s top scorer from last year, Lance Laing) have all been making major moves.

And that’s the challenge for NASL teams; they not only have to thing about what areas need to be bolstered, but they also have to understand that the level of play I 2016 won’t be the same as it was in 2015.

“The NASL, now, for sure is the strongest that it’s ever been, other than the old NASL I played in — the dinosaurs, it seems that long ago,” said Miller after FCE’s session at Commonwealth Fieldhouse. “Certainly there’s been a lot of movement within the league because we’ve got three new franchises. Of course, there will be a lot of announcements that way. But the money that’s being spent now within each club is fantastic.

“The Cosmos, of course, they’re the leaders. Minnesota have always been high spenders in the league. Tampa Bay have definitely thrown some money at their franchise as well. Indy have changed coach, Oklahoma, the list goes on and on.”

Keegan was one of the first off-season signings announced by the Eddies. The American striker, who most recently played in Ireland’s top flight, said he’s been almost overwhelmed by the number of players coming into the league.

“Every single team, it seems, has new signings,” said Keegan. “There’s a guy who played in the Champions League last year [Fort Lauderdale’s Matheus Carvalho]. Every team is getting big signings. And I saw this post yesterday that attendance for the NASL is the fifth-best or sixth-best out of second-tier leagues in the world. I didn’t really realize it. It’s a second-tier league, but it’s a very good league and I am looking forward to being part of it.”

Miller admitted that a poor spring is the big reason that FCE has fallen short in its chase for a post-season spot in each of the last two campaigns. Now, a big part of the poor spring is a roster that has been stretched by the commitments of league and Amway Canadian Championship games. But, Miller said that the signings and returning players will combine to form the deepest roster the club has ever had.

“There was a method in how we went about it,” Miller said. “There was a thought process of, positionally, what we wanted. And we now have two players for every position in this club. Three, including the goalkeepers. That is a terrific first-team squad. There is no dead wood with the club. So, there’s no player here in this group that will not be considered as a first-team player.”