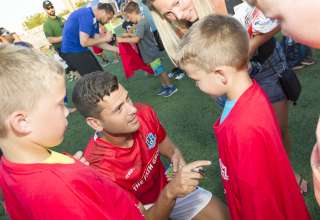 FC Edmonton coach Colin Miller said Saturday night that the team is close to signing a new player, and that a deal could be “pushed across the line” in the next week.

Miller has a lot of holes to fill. To start the season, the team made the decision to go with a smaller roster than it had in past seasons. And, thanks to a slew of injuries, international call-ups and suspensions, that smaller roster was stretched. During Saturday’s loss to New York, the Eddies had only four players of the bench. One was a goalie. Two could only play 15 minutes each, max. Only one player could have been used as an outfield player in anything other than an emergency situation.

And the Eddies bid goodbye to two international players in the past week. Dean Shiels’s departure was confirmed earlier in the week and, on Sunday, the Eddies announced that Norwegian midfielder Sabri Khattab was going to return home.

Khattab made 11 appearances and didn’t score. He started Saturday’s game against the Cosmos.

“The move suits everybody and everyone at FC Edmonton thanks Sabri for his time with the club,” Miller said in a release issued by the club. “I think he definitely improved from when we first saw him in pre-season back in February as his fitness levels, the speed of his play and his defensive awareness all improved.

The Eddies already had one international roster spot free before the Shiels and Khattab moves. Now they have three. And Miller has a  big job on his hands. The team finished the spring season in second last place. With just 13 points, the Eddies will begin the fall season 11 points out of fourth. Remember that the third and fourth playoff spots in NASL are determined by the combined spring and fall tables, so the Eddies can’t afford to fall any further back.

The Eddies’ 11 goals scored in the 16-game spring season was eight goals worse than the second-from-the-bottom team on the scoring charts, Puerto Rico FC. The Eddies were the only team to average less than a goal a game, and were shut out in five of their final six games of the spring campaign.

Take away a four-goal outburst in New York, and the Eddies have just seven goals in the remaining 15 games.

Miller has a much bigger rebuilding the job in the transfer window than he likely would have imagined back in the spring. But a team that got to the league semifinals in 2016 is going to require quite a bit of fresh blood.

The Eddies open the fall season July 30 with a home date against the Indy Eleven.

If fullback Netan Sansara and captain Nik Ledgerwood can be in better health for the opening of the fall season, it might feel like two new signings for the Eddies, because both have been missed during their lengthy injury spells. If defender/midfielder Adam Straith can be brought back for the fall season — he was on a half-season contract — that could check another box. If keeper Nathan Ingham can get back sooner than later from his concussion, and midfielder Dustin Corea can get over a foot problem… well you get the idea. There’s a lot of talent that’s in the team’s injury ward.

And, despite the team’s struggles, the business has been humming at the gate. But, the fall season will see a return of the Sunday afternoon games that have been problematic in the past when it comes to drawing fans. The Eddies played the majority of their games on Saturday nights in the spring season, and were rewarded with a bump in attendance — we’re taking sellouts. But the people who came out to their first Eddies’  games didn’t see many goals for the home side. They didn’t see many wins. Miller pointed out Saturday how disappointed he was that the team played so poorly in front of so many enthusiastic home fans. He’s certainly feeling pressure to give those new supporters something to celebrate.