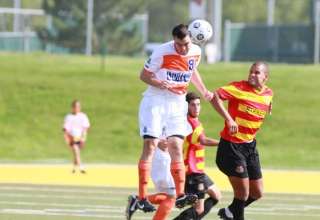 In the wake of the 5-0 loss to the Fort Lauderdale Strikers in the first round of the NASL playoffs two weekends ago, the team has announced major changes will be made.

Eleven players have been told they will not be back next year. On that list are defenders John Jonke, Eddy Sidra and Alex Surprenant.

Jonke was a regular starter for the Eddies, and won an NASL defensive player of the week a month ago. But Edmonton did have the second-worst defensive record in the league, and Jonke was deemed surplus to requirements, as were Sidra and Surprenant, who platooned in the left-back slot.

Sidra was a hometown boy with a history of playing for the national team. But a series of injuries brought his durability into question. The former Toronto FC trialist will now have the chance to try and shop for another deal.

FC Edmonton General Manager Tom Leip said all of the decisions made were football-related; there were no outstanding contract issues that influenced the decisions.

“We are in a situation where we need to improve,” Leip said. “It’s not that we had a terrible year but we have the aspirations to get better.”

Also cut loose was local goalkeeper Jaswinder Gill, who missed all of the season due to injury. Defenders Jeffrey Quijano and Paul Matthijs, who went home to the Netherlands to get hernia surgery, are also off the roster.

Midfielder Chris Lemire, the team’s only on-field link to the Edmonton Aviators of the USL, also won’t be offered a new contract. University of Alberta product Sam Lam and midfielder Mutanda Kwesele also won’t be back.

Trinidad and Tobago striker Conrad Smith — who lost his starting job early in the season after a string of missed chances is out, as is veteran Dan Antoniuk, who saw Canadian youngsters Michael Cox and Paul Craig take more of the time as target men as the season progressed.

FCE scouts were already at the recent U-16 champonships in Lethbridge, and trials will begin in November. Leip said the focus will be to bring Canadian talent in to replace the Canadian players who were released. But the fact that the Montreal Impact cut seven players today — including striker Ali Gerba and midfielder Luke Kreamalmeyer — has been noticed by FCE’s brass.

“Of course we have noticed,” Leip said. “I am sure that some of those (Impact) players will be invited for tryouts.”

Because FCE’s coaches get back to work in the first week of November, it will allow the club to get the jump on other NASL teams when it comes to free agents. But expect to see some of the players cut by FCE to get shots with the new San Antonio franchise.

“In a way, we might be helping some of these players out by allowing them to have some options of where they can go and look for a contract,” said Leip. “For other, veteran players, you realize that this may be the end of the line for them and that’s always a tough call to make.”

And Leip confirmed that the team has heard from interested parties in both Europe and MLS about the players on its roster.