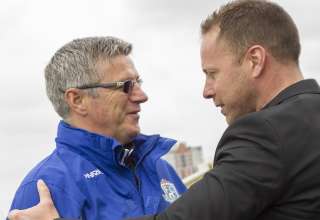 This Saturday night, the San Francisco Deltas are hosting a special night for singles at Kezar Stadium, offering the chance for like-minded soccer fans to meet and mingle.

FC Edmonton’s players are hoping they can turn that game into the date-night from hell. The Eddies will provide the opposition.

But Eddies coach Colin Miller, as he did last week, will have to deal with injury headaches. Fullback/midfielder Allan Zebie, captain Nik Ledgerwood and fullback Netan Sansara all watched Wednesday’s training session from the sidelines. Midfielder Sabri Khattab missed training due to illness.

“It’s the walking wounded at the moment,” said Miller. “One or two had to step out with some bits and pieces, niggles. We won’t know who’s fit and available till we get down there.”

“Getting down there” won’t be as tough for the Eddies, as road trips go. San Francisco is only one (count it, one!) time zone from Edmonton. The Eddies only have to make one quick connection in Vancouver. It shouldn’t take more than three and half hours to get down to northern California. For the most travelled team in North American sport, San Francisco is a puddle jump.

“This is a local derby, this is,” Miller joked. “We could almost walk there or take bikes or whatever. It’s great; it’s a west-coast rivalry, it’s as close as you can be for a rivalry in our league. It does feel like a genuinely short trip.”

Put that in perspective. What the Eddies consider a “short trip” is 2,387 km (that’s 1,483 miles for those of you still using weights and measures from the 12th century).

Winger Sainey Nyassi said that the Eddies have performed well in their most recent two matches, a 4-2 win over the Cosmos and 1-0 loss to Miami that was influenced by a controversial call (more on that at the bottom of the article).

“We just have to play as a team and keep pushing,” said Nyassi, who scored against the Cosmos last week. “We lost against Miami, but we just have to pick up the positives out of that game and move forward.

“I have so much more confidence now than a couple of games ago, and I think it’s like every player on the team.”

The Deltas are coming off a 3-1 win over Puerto Rico. Kyle Bekker scored twice in that game and was named the NASL’s player of the week. Miller worked with Bekker when FCE’s coach was also the interim manager of the Canadian national team. Bekker is joined by three other Canadians on the roster — Maxim Tissot, Karl Ouimette and Nana Attakora.

“It’s interesting how well the Canadian lads are doing in the NASL — I think it’s fantastic,” said Miller. “Mason Trafford [at Miami FC] has been one of the best centre backs in the league for a few years now, and he’s playing with the best team in the league at the moment. He’s just a great professional. I worked with Mason when I was with the Whitecaps, for a short period of time before he went to Europe. And then you see the Canadian lads who are down there in San Francisco. Kyle Bekker’s goal, as I explained to my players this morning, the left-footed strike that he scored in Puerto Rico last weekend, if there’s a more clean strike this season, I’ve yet to see it. It’s a fantastic goal. It’s great to see big Nana. He went through a period of time when he was with San Jose when I think he got a serious concussion — and he was out of the game for a little while. It’s great to see the big fella back. We’ve got great Canadian content here, as well. The guys are ready.”

Adam Straith, who had been with the Canadian national team, will meet up with FC Edmonton in California.

The expansion Deltas are a bit of a paradox; the team has picked up a solid nine points in six road games, including a win at Clarke Field earlier this spring. But Marc Dos Santos’s side has won just one out of five home matches. Miller said that, as was the case when Dos Santos coached the Ottawa Fury, the Deltas are built on a foundation of being defensively responsible, then hitting teams with a good counterattack. But, when you’re at home, there’s pressure to entertain the crowd and not play the defend-and-counter game. So, at home, the Deltas get away from their strengths.

Miller is still angry about referee David Barrie’s decision to assess a foul on Tomi Ameobi just as he thought he’d headed home a goal in Saturday’s 1-0 loss to Miami FC.

The fallout from that call? Miller spoke with Isaac Raymond, the Canadian Soccer Association’s national referee assessor. The CSA assigns all referees for NASL games on Canadian soil.

“I got the belt a little bit for my behaviour after the game,” said Miller.  “I apologize for that; but I’m quite a passionate wee guy. I care very much about our team’s performances and I had a go at the referee because of the decision.”

Miller said he told Raymond that he was unhappy that he saw Barrie point to centre — the signal for a goal, before crossing his arms to award the free kick to Miami and signal “no goal.”