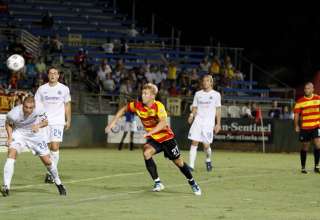 Think of anything to follow the prefix “out” and it would describe FC Edmonton’s maiden playoff performance.

The Eddies were routed 5-0 by the Fort Lauderdale Strikers in their NASL quarterfinal, as FC Edmonton’s season came crashing down around its ears.

It was men vs. boys in south Florida, and the Eddies picked the worst possible time to play its worst game of the season.

“I don’t know what it is,” said FCE coach Harry Sinkgraven. “We had our normal preparations before the game. We looked confident going into the game. But we made a lot of mistakes in the back… We did not play composed. When we had the ball in the back, we tried to play the ball up the field too quickly.”

Right from the outset, Eddies’ goalie Rein Baart was placed under siege. But, amazingly, it took the Strikers almost the entire first half to get a ball across the goal line. Strikers’ forward Walter Restrepo saw his curling shot smack off the post. Abe Thompson had a wide-open net to hit from two feet out, and somehow mishit an attempt.

Forward Brian Shriver had a chance, wide open in front of goal, but Baart did well to come out and stop the low drive with his legs.

Edmonton offered nothing in exchange. There were no sustained periods of possession, and lone striker Michael Cox was eventually forced to come back to help his team defend, leaving no one at all to occupy the Strikers’ back line.

But, right before the halftime whistle, Shriver got the Strikers their much-deserved lead. He found some space in front of the FCE goal, caught keeper Baart leaning to his right in anticipation of the shot, and poked a slow roller to Baart’s left. The keeper was rooted to the ground as the ball crossed the line.

Instead of using the halftime break to gather themselves, the Eddies came out looking shellshocked. Within seconds after the restart, Abe Thompson doubled the lead, climbing over defender John Jonke to nod a cross home.

“At halftime, you try to improve the game, give the team advice,” said Harry Sinkgraven. “And, after 20 seconds, you are 2-0 down. At halftime, we talked about the game plan, and within 20 seconds they score again.”

The Strikers kept coming, and soon Shriver had his second of the night, rounding Baart and firing home.

Central defender Paul Hamilton was sent off late in the match for a late foul — and it capped off a miserable night for the Eddies.

Now, FCE fans will wonder what happened to such a promising season. After midseason signing of midfielder Ilja Van Leerdam, the team went from being one of the NASL’s best teams to one that struggled through the final stretch. Seven wins before the IvL signing, three after it.

That’s not to focus the blame on just one player; the truth is that teams like Fort Lauderdale, Puerto Rico and FC Tampa Bay (which, ironically, was eliminated by NSC Minnesota Saturday) have greatly improved from April to now. FC Edmonton came into the season on a high — and you could argue that the FCE of April would beat the FCE of October.

And, really, the cause was lost three weeks ago, when Edmonton lost 2-1 at home to Fort Lauderdale. Had FCE won that game, and this playoff game would have been played on a cool Edmonton night on the hard, unpredictable turf of Foote Field.