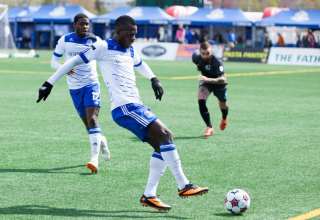 Lance Laing in action against Minnesota last season. Will he play FOR Minnesota this weekend? PHOTO: TONY LEWIS/FC EDMONTON

Some news and notes from FC Edmonton’s Wednesday training session at Clarke Field: FC Edmonton’s home opener should create a lot of talking points. Minnesota United, loaded with new signings as the club prepares to move to MLS, is in town. Minnesota United signed FCE fan favourite Lance Laing in the off-season. The two teams have enjoyed a great rivalry, with lots of close games.

But Laing didn’t start in Minnesota’s season-opening 2-1 loss to Carolina. And, judging from the comments from Loons coach Carl Craig, who spoke openly about his disappointment in the Jamaican’s fitness level, Laing’s appearance as a sub in that game hasn’t erased the doubts. So, now the question isn’t how the Eddies will react to Laing — but if Laing will be on the pitch Sunday afternoon.

FCE coach Colin Miller said he can’t speak to the Laing situation. “Not my player. Lance was terrific for us, but we’ve moved on.”

But what he can say is that he expects an angry and motivated Minnesota team to arrive in Edmonton.

“They’ve always been good games, even down in Minnesota. We’ve had some cracking games that are a real good advert for the league. We know they’ve spent a lot of money in the off-season, they’ve brought in some quality, it seemed like every couple of weeks that they were signing more and more players. It’s a very well-run organization.
“They will be hurting, because it’s their expectation to win every game. But we’re at home, and we have to build on the tremendous defensive performance on Saturday night in Oklahoma. We have to try and keep 11 players on the park, for sure.”

A lot has been said and written (including on this site) about the low-tolerance directive from PRO to its officials; the refs have been told to call games closely and not be afraid to brandish red cards. In March, PRO head Peter Walton said he felt his refs missed 28 per cent of red-card infractions last year.

And, it’s not just an MLS issue. PRO assigns referees for NASL and USL games. In NASL, PRO assigns refs for all games on U.S. soil, while the Canadian Soccer Association is responsible for the game officials in Ottawa and Edmonton.

Edmonton played with 10 men for an hour in Saturday’s season-opening 0-0 draw with Rayo OKC after captain Albert Watson was sent off for a last-man-back foul on Marvin Chavez.

Miller said he wasn’t sure if the call on Watson was part of the directive. He said he’s heard a lot about the crackdown in terms of MLS, but not much has been said to him — even though PRO administers officials in both leagues.

“I think Albert’s decision on Saturday, now that I’ve seen it a few times, the lad makes a meal of it. There is a debate whether or not he’d regain control of the ball when he made the first touch past Albert. But, it would be one we would have been claiming for, as well. So, I can’t fault the referee. But the lad has made a meal of it as some players in our league and in the MLS do. But, we just have to be careful — as long as the message is consistent.”

What Miller does like is the get-tough attitude being taken with simulation. He applauded MLS for handing Whitecaps forward Masato Kudo a ban for simulation; his pratfall led to a penalty kick in a win over Houston earlier this season. In Miller’s mind, the leagues should do whatever they can to punish diving.

“When I watched the Whitecaps play Houston, when (Endo) went down for the penalty, my initial reaction was that it was a dive. I think it’s great that the leagues are cutting down on that. For me, it’s cheating, it’s the scourge of the game, something we have to weed out. I despise it. I won’t tolerate it here at our club. We want people to stay on their feet as much as possible. No faking injuries and all that nonsense. I’m very happy that the leagues are going to clamp down on cheating and diving. We’ve been done a couple of times in the Amway Championships with that sort of thing, like Camilo (then a Whitecap) back at Commonwealth Stadium. Nobody touched him and he went down screaming. I got sent off for that one. I’m all for people staying on their feet; it’s a terrible advertisement for young players playing the game to see people cheating.”

Miller was referring to Camilo’s flop that led to the Whitecaps’ game-altering penalty in the first leg of the 2013 Canadian Championship semifinal.

FCE didn’t only have to deal with having to play with 10 men at Rayo OKC; the team was also concerned about the sorry state of the pitch at Miller Stadium.

The new artificial surface was laid just days before the NASL season opener. Midfielder Nik Ledgerwood said a long nail was found on the pitch during the pre-game warm-up. And Ledgerwood pulled no punches in his critique of the surface.

“The turf down there was terrible, to be honest. It looked good from afar, but it was just five-by-five squares that were all Velcroed together. It was brand new, no rubber on it. There was no real grip. I think they’re going to struggle down there with those big players not being happy playing on that turf. It was slippery. You can go the middle of the pitch and lift up corner because it was all Velcroed together.”