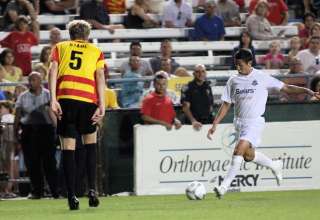 It’s hard to use the term “business as usual” for a club that played it’s first NASL game on Saturday, but FC Edmonton coach Harry Sinkgraven continues to put his team through the paces in Florida, away from the Alberta cold, as it prepares to try and make it two wins a row this Saturday against the Atlanta Silverbacks.

“No one from any body has contacted us,” said FCE spokesman Andreas Morse.

As a spillover from the ongoing power struggle at the ASA level, its board is preparing a motion which would see it allow the courts to resolve disputes; that contravenes FIFA regulations against government non-interference. The Canadian Soccer Association has already urged the ASA to abandon the motion. If adopted, there is speculation that the CSA would need to suspend the ASA to keep the national federation in FIFA’s good books.

There has been speculation about FC Edmonton’s status if the ASA would be suspended — would the new club would be allowed to play or not? But FCE’s take is that the club would not be affected unless, at any time, FIFA ever decided to ever act against the CSA as a whole.

There is yet to be a legal interpretation of how an ASA ban, if it comes to that, would affect FC Edmonton. In the CSA bylaws, there is a special provision for pro teams in U.S.-based leagues. It reads: “Should a club be desirous of entering a team in a United States-based league, the club shall, in the first instance, obtain the consent of the District Association to which the club belongs and then of the Provincial/Territorial Association to which the District Association belongs. If the application is approved by the Provincial/Territorial Association, it shall be forwarded to this Association for confirmation.”

The legal issue here: Does “consent” equal membership? FC Edmonton’s membership as a recognized professional team came from the Canadian Soccer Association Annual General Meeting back in 2010. It was directly approved by the CSA.

“It’s not affecting us at all,” said Morse of the ASA debate. “The feeling here is that we are not concerned.”