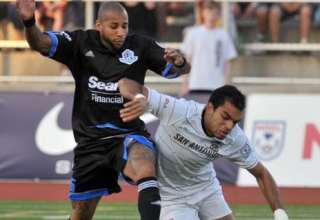 FC Edmonton will leave Texas looking like they’ve been in a bar brawl.

Both defender Paul Hamilton and midfielder Kenny Caceros were forced to leave the game at halftime with injuries. Defender Fabien Vorbe broke his nose in the first half after a collision with San Antonio Scorpion forward Walter Ramirez.

And, a 2-0 loss to the expansion San Antonio Scorpions — with the first marker coming after a controversial penalty call — made the bumps and bruises all the more painful for the visitors.

It was a game that saw FC Edmonton struggle to generate anything that troubled Scorpions keeper Daryl Sattler. Other than some tough tackles, there was little that either team generated offensively through the first 35 minutes of what was a dour midfield battle.

After Vorbe broke his nose, Eddies midfielder Shaun Saiko was sent sprawling to the track that rings the multipurpose pitch at Heroes Stadium after being fouled by forward Pablo Campos.

“It was bit chippy towards the end of first half but that’s how it goes sometimes,” said Saiko. “I think it shows how important this game was to both teams. They really wanted to put their stamp on the game. And that’s just football. Sometimes it goes smooth, sometimes it gets chippy.”

Michael Cox, who scored last week in the Eddies’ win over Atlanta, had an ankle problem and wasn’t available. And, without the big, quick centre forward, FC Edmonton couldn’t find anyone to hold up the ball up front.

But the game changed on what looked to be a manageable play for the Eddies’ backline. Reigning offensive player of the week Campos, who scored twice for San Antonio in its most recent win, came down the field one-on-two versus FCE defenders Hamilton and Kevin Hatchi. Hatchi and Campos went shoulder-to-shoulder, Campos and Hatchi both went down — but Campos was awarded the penalty.

“The penalty, in my opinion, wasn’t a penalty,” FCE coach Harry Sinkgraven said at halftme to the San Antonio webcast crew. “But, we can’t do anything about that now.”

“I didn’t feel they had much of the play, to be honest,” said Saiko. “It came from out of nowhere and they were up 1-0.”

San Antonio’s Jonathan Greenfield slotted a low penalty just inside the left post. Even though keeper John Smits guessed the right direction, he couldn’t get over in time to keep the ball from going in.

Just after the goal, the Eddies’ closed out the first half with what would be their best scoring chance of the day. Midfielder Shaun Saiko smashed a shot towards goal that Sattler did well to save, as he got a hand to the ball to tip it away from the goal. Strangely enough, FCE didn’t even get a corner out of the play, as the officials didn’t see the Sattler save.

With Hamilton out of the game in the second half, an Edmonton back line that has been vulnerable to balls in the air all season long, were victimized on a set piece. Hamilton is the Eddies’ best defender in the air, and his presence was sorely missed as former New England Revolution man Ryan Cochrane headed home a delivery from Greenfield.