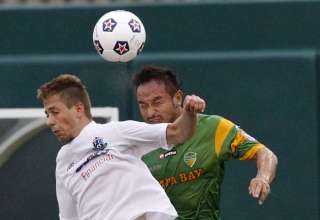 In an entertaining, end-to-end match which saw both teams create their fair shares of scoring chances, FC Tampa Bay got a second-half goal from Shane Hill and an insurance marker from Pascal Millien to give the home side a 3 -1 win over FC Edmonton.

It’s the third straight loss for FC Edmonton, which has fallen from a comfortable second in the NASL standings right into the dogfight for playoff position in the middle of the league table.

After an eventful first half that saw the teams go into the dressing rooms at 1-1, FCTB took control at the 60-minute mark.

First, FCE keeper Rein Baart denied Millien with a fantastic leaping save, but the Eddies couldn’t deal with the ensuing corner kick. The scrambled ball fell to Hill, who hammered home a shot from the top of the box.

But, while FCE smarts about giving up the goal, they might be angrier about the number of great scoring chances they let go wanting. But, the home team also missed some glorious chances, too — this game could have easily been a 5-4 match. This was not a defensive clinic, as both teams were guilty of surrendering too much space and making very poor passes out of the back that led to scoring chances the other way.

“We had a really heavy storm before the game,” said FC Edmonton striker Daniel Antoniuk. “So, the field was a bit sloshy. The ball was slipping around. So, the game went back and forth, there were a lot of chances.”

Even with central defender John Jonke back from suspension, at no point did FC Edmonton look comfortable in the back, as evidenced by Tampa’s late insurance marker. The Eddies were caught short in the back on a ball lofted deep into their territory. FCTB forward Mike Ambersley got the ball, and drew Baart to him. But no one picked up Millien on the other side of the area, and it was child’s play for Ambersley to square the ball for his teammate, who was able to tap it into an open goal.

The game started off as poorly for FC Edmonton as it finished. Within six minutes, FCTB had the lead. Aaron King, who terrorized FC Edmonton’s back line just two games ago, converted the chance offered to him by Millien.

But that goal spurred Edmonton to life, and the teams began to trade chances.

Millien hit a post, while FC Edmonton’s Antoniuk found himself with only FCTB keeper Jeff Attinella to beat, but could only push a weak shot at the keeper.

Attinella was also quick off the line to prevent FCE forward Ilja Van Leerdam from running onto a through ball from Kyle Porter; Porter regularly moved off his regular post on the right sideline to a more central position, and saw a lot more of the ball than he has in the past couple of games.

And, just as Antoniuk poked a weak shot at Attinella when he had the chance to score, Ambersley returned the favour later in the first half, toe-punching a weak shot at Baart after the ball fell to him because two FCE defenders were occupied trying to get the ball away from the six-foot-one King.

But Edmonton finished a deft passing play to get the equalizer before halftime. Niko Saler, starting ahead of Alex Surprenant at left back, played the ball into the middle for Shaun Saiko, who lashed a shot at Attinella. The keeper made the save but couldn’t control the rebound; Antoniuk pounced on the ball and shifted the ball to Alex Semenets, who smashed the ball home.

“Dizzy (Antoniuk) made a great play, beating the keeper to the second ball,” said Semenets. “Then he played it to me, and I took a couple of touches to get it past the keeper, and I was able to thread it through even though it was a bad angle.”

After FCTB took the lead, Baart held his team in the game, denying both Ambersley and Tsuyoshi Yoshitake on clear breakaways. And Mozzi Gyorio, FCTB’s resident Canadian in the lineup, struck the post.

But, Attinella made a couple of great stops of his own to preserve what was, at the time, a 2-1 lead for Tampa. He dove to his left to make a save off an Antoniuk shot and, on the ensuing corner, tipped an effort from Jonke over the bar.

“The goalie made a couple of great saves,” said Antoniuk. “It is frustrating not to score. And it’s difficult for the team to win when the forwards don’t score. If I can put one or two of those chances away then this game is a little bit different.”

It was hard to keep track of all the scoring chances. But, in the end, no one in Edmonton will care that this was a great advertisement for the NASL brand. They will be concerned about a team that has been scored on nine times in the past three games; and that a club that looked so strong and composed for most of the season now seems very, very fragile.

But, after the road trip finishes with Saturday’s game in Fort Lauderdale, FCE finishes with six of nine at home. So, while there is concern, there isn’t outright panic.

“No need to panic,” said Semenets. “We have a lot of games left.”