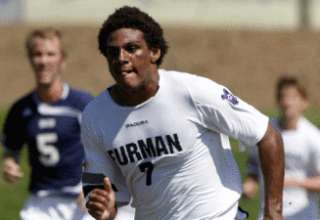 Fabien Vorbe was in the starting XI, while defender Adam West and Canadian striker Mario Kovacevic, who was a scoring standout at the University of Toronto, came in as halftime subs.

All three of the trialists joined FC Edmonton when the club arrived in Vancouver.

But, it was Serisay Barthelemy who was FCE’s dominant player on the day. The newly acquired French forward scored all three goals for the Eddies. Barthelemy was signed two weeks ago, just before the team got on the plane for the Arizona camp. Barthelemy, who previously played at SC Bastia, impressed at the NASL combine — enough that he got offers from multiple NASL teams. But he chose Edmonton, and has been impressive in preseason action.

“It was good for me,” said Barthelemy after the match. “It was good for the club. It helps us build confidence. And I got three big assists from my teammates. It felt good.”

As well, Chilean striker Yashir Pinto, who could not join the team for its preseason training camp in Casa Grande, Ariz. because the paperwork for him to work in the Unite States is not yet complete, was finally able to rejoin his teammates in Vancouver and got his first start in FCE colours. He played 45 minutes before coming off at halftime for Kovacevic, then came back on in the 66th minute.

Last season, West played in a dozen matches for the Fort Lauderdale Strikers, the team that knocked FC Edmonton out of the playoffs last October. West also played for the Seattle Sounders before the club graduated to MLS.

Vorbe is a defender who has made a couple of appearances for the Haitian national team, and was at Furman University. What’s interesting was that he’s played forward in the NCAA and for his national team, but started on the back four for FCE on Saturday.

The Eddies will now return to Edmonton for more training. Vorbe will fly back with the team, while West is expected to join the squad on Monday.