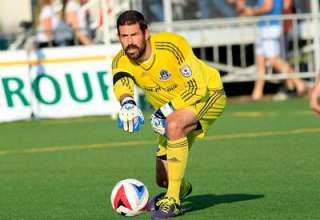 FC Edmonton coach Colin Miller found out last week that goalkeeper Matt VanOekel would be making the move to MLS, as the NASL’s Golden Glove winner was going to sign with Real Salt Lake.

RSL made the signing official on Thursday.

But Miller said the club is already well on its way to replacing VanOekel, who led the league in goals-against average and set a new NASL record for clean sheets in a season.

“We have started to make inquiries about  a replacement,” said Miller. “We are well down the road to acquiring a new keeper of a similar calibre.”

Obviously, with NASL in a state of flux, with many players being released from contracts, there is a glut of very good goalkeepers on the market. And, as second-division clubs in North America go, FC Edmonton has proved to be maybe the most stable club on the continent, with owner Tom Fath stating over and over that the club will play in NASL in 2017 – and, more importantly, that there will be an NASL in 2017,

Miller was signed to a three-year extension just a couple of weeks ago and the club is hiring new staff. It’s also set a new record for season-ticket sales. M

Miller said that MVO was offered a new deal at the end of the 2016 season, the sides had agreed on terms but the keeper asked for a chance to have a look around and see if he could move up to a higher level of soccer.

“It was his dream to move to a higher level,” said Miller. “And, in this case, it was a move to MLS. We are not going to hold a player back.”