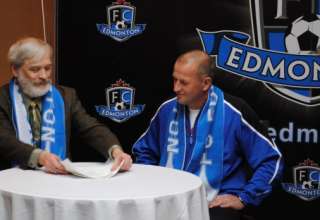 FC Edmonton coach Harry Sinkgraven and assistant Hans Schrijver headed off to Florida Thursday afternoon to take in this weekend’s NASL combine, in which six Canadian hopefuls will participate.

But, there’s very little room left at the inn.

Director of Soccer Operations Joe Petrone said Thursday that FC Edmonton’s training camp roster is very nearly full — and that there are at max four more spots that can be handed out to hopefuls.

“We are still looking for a top centre back and a left back,” said Petrone. “And, of course, if we see someone there who is outstanding at their position, the club would look at that player, like any team would.”

Of the six Canadian players who will take part in the combine, three were recommended to NASL by FC Edmonton. Last season, FCE found one player at the combine — Jeffrey Quijano, who didn’t see any first-team action and isn’t back in 2012.

At forward and midfield, FC Edmonton already has a logjam of players. The team has already signed striker Elvir Gigolaj out of St. Mary’s University, and FCE is confident that a new round of medical tests, coordinated by Colo-Colo in Chile, will clear striker Yashir Pinto for a one-year loan move to the Alberta capital.

Last weekend, the former Chilean U20 striker went back home to get more tests done, after something came up in the preliminary medical done in Alberta. The team is being careful to protect Pinto’s privacy and won’t reveal the issue indicated by the tests.

But, there is still an air of confidence around the club that the issues will be cleared up and Pinto will be ready to rejoin the team when it heads to Arizona in the first week of March for training camp.

With Matt Lam returning to Edmonton after his one-year stint in Japan, Kyle Porter back on the right side, and Michael Cox, Paul Craig, Kyle Yamada and Shawn Chin also coming back, the forward positions will be jammed.

Shaun Saiko (NASL Best XI in 2011), Dominic Oppong, Ilja van Leerdam and Chris Kooy are all experienced players, but in the 4-3-3, midfield spots are at a premium.

And Petrone said that, barring injury, the goalkeeping position is set. The team has four on the senior roster. Canadians Michal Misiewicz, David Monsalve and John Smits have been signed, while Lance Parker is still rehabbing his right arm — which he fractured during the 2011 season — but is expected to be ready to join the team in Arizona.

So, while Sinkgraven and Schrijver will be doing some window shopping in Florida, their wish list will be very, very short.