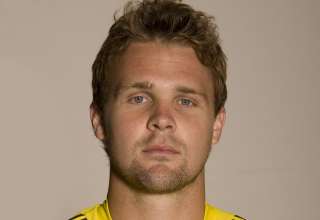 The Montreal Impact could not take advantage of a fatigued Columbus Crew team.

With just 10 minutes left on the clock and holding a 1-0 lead, the Impact couldn’t hang on against the Crew. Reigning Player of the Week Federico Higuain set up Chad Marshall’s equalizer in the 80th minute, and Emilio Renteria’s winner in stoppage time, as the Crew put a dagger into Montreal’s playoff hopes with a 2-1 win.

The Impact will wonder how the central defence, knowing it was holding a vital lead late in the game, could allow itself to be beaten in the air twice in the space of 12 minutes.

Renteria was left wide open in the penalty area to direct Higuain’s cross over Impact keeper Troy Perkins in the 92nd minute. And Higuain was given acres of space down the left side in which to engineer a cross, as veteran Alessandro Nesta inexplicably decided to lay off rather than take away the Argentine’s space on the wing. It was a massive error in judgment from Nesta, and it allowed Higuain the freedom to whip in the ball for the winning goal.

In the 80th, the Crew equalized. Higuain knocked a free kick into the Impact penalty area, where Crew central defender Chad Marshall, who moved up into the attack, beat Impact defender Nelson Rivas in the air to nod the ball home.

The Impact will rue these defensive mistakes and wonder what could have been. With so few games left on the schedule (more on that later), this may be the game we look back on and say “this is where the Impact blew its playoff chances.”

With less than 20 minutes left in regulation in Saturday’s match at Crew Stadium, Marco Di Vaio scored to give the Impact a 1-0 lead, a goal set up thanks to some guile from Impact coach Jesse Marsch.

Marsch, recognizing that this was the Crew’s fourth match in the space of 11 days, brought in the fresh, speedy legs of Sanna Nyassi halfway through the second half. And the opening goal was created when the speedy forward split two Crew defenders with a run up the left side, then slotted the ball to the top of the box for Felipe, who nudged the ball to his right for Di Vaio. Columbus defender Nemanja Vukovic slid to cut off Felipe’s pass, but got little on the ball. That left Di Viao with no defender to challenge his shot, and the Italian veteran took his chance calmly.

But, instead of giving the Impact its spark for a sixth win in a row, Di Vaio’s goal looked to spark a tired Crew side to give everything it had to not allow the Impact to leave town with three points.

For the Crew, this was the team’s fourth match in a week and a half, as it has played midweek matches each of the last two weeks. So, with the Crew needing to push for a playoff spot, coach Robert Warzycha didn’t have the luxury to rest players. The Crew came into the game even on points with Montreal, a point behind Chicago (which plays Houston Sunday) and D.C. United (which plays at Real Salt Lake late Saturday), who are tied in the 4/5 positions in the Eastern Conference. But the Crew has three games in hand on Montreal, which made Saturday’s game a must-win for the Impact. Because of the fact that the Impact has just four regular-season games left on its schedule — while all the other teams have six or seven — after this weekend’s play, the Impact’s remaining matches all have to be seen as three-pointers if the team is to make a successful playoff run. Everyone else left in the race has just too many games left.

In the wet conditions in Ohio, the Impact got the better of the chances of the first half and was more useful in possession. But two outstanding chances — off the feet of Lamar Neagle and Daby Arnaud — were thwarted by Crew keeper Andy Gruenebaum.

With just more than half an hour played, Neagle was played through the Columbus backline with only the keeper to beat, but Gruenebaum read the move, got off his line quickly and made himself as big as possible. Neagle’s shot clipped Gruenebaum’s outstretched arm.

With the halftime whistle just seconds away, a hopeful ball was played into the Columbus penalty area. Crew central defender Marshall didn’t pick up the flight of the ball, and it hit him squarely in the back, with the bounce oh so deliciously falling to Arnaud. But Arnaud scuffed the shot, not getting enough power to get it by Gruenebaum, who batted the ball away with his outstretched arm.

Meanwhile, the Crew’s attacks were few and far between, with Impact defender Jeb Brovsky snuffing out the best chance of the half, a low cross from the left wing from the foot of Dilly Duka. The ball looked as if it was going to find the Crew’s Eddie Gaven on the far post, but the shot was deflected wide by Brovsky.

And, while it would be easy to say “so what if a first-year MLS team doesn’t make the playoffs?” we have to remember that the Impact is not a team that is built for the long-term. With the signing of Italian veterans like Di Vaio and Nesta, this is one of the older teams in the league. This is a team that is built to win now — and the games are running out.