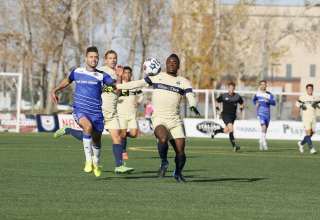 Ritchie Jones in action against Jacksonville before he was sent off. PHOTO: TONY LEWIS/FC EDMONTON

Mallan Roberts headed home an inch-perfect header off a Sainey Nyassi cross to allow 10-man FC Edmonton to fight back for a 1-1 draw with the Jacksonville Armada Sunday at Clarke Field.

What preceded was the wire-service-like lead. But, in truth, Roberts’ last-gasp heroics allowed FCE’s players to save their blushes in front of the home fans who turned out to see the NASL season finale.

After an 0-3-0 road trip that made the final game of the regular season about pride and not the playoffs, the Eddies responded to put together one of the worst 90-plus minutes that we’ve seen in franchise history. Make no mistake, if not for the heroics of keeper Tyson Farago, Jacksonville would have had a deserved three-goal lead before Roberts’s injury-time effort.

After the game, FCE midfielder Ritchie Jones apologized to team owner Tom Fath for his absolutely mind-boggling decision to lash out at Jacksonville’s Akeil Barrett. In the second half, already on a yellow. Jones turned and took a mighty backswing with his foot, then followed through in what could only be seen as an attempt to ruin Barrett’s chances of fathering a child in the future.

As Jones walked off the pitch, we watched FCE coach Colin Miller simply staring at his midfielder from the bench. Even though Miller had the glasses on, you could feel the iciness of his gaze.

And, despite the late equalizer, Miller was so disappointed in the Eddies’ effort, that he didn’t want to talk about what happened on the pitch.

“I want to say thank you to the fans,” he said. “I don’t want to talk about football; because that was one of the worst performances I’d seen.”

At halftime Miller said the Eddies were so bad, that they made it seem like the Armada has 16 men on the field. He talked about players being “colour blind” because they gave the ball away so much.

It took till 65:30 of the match for the Eddies to register a shot on the Jacksonville goal, a drive from Dustin Corea.

Meanwhile, Farago, making his second start of the year, was asked to make several outstanding saves. He stopped Jemal Johnson — who terrorized the Eddies down the left side all game long — from close range. He made a ridiculous leaping save to deny Jaime Castrillon’s header. He made a great near-post stop of Shawn Nicklaw’s drive.

But the best of the bunch was the save on Castrillon.

“That was my Hollywood save,” he said. “I knew the cameras were on.”

He was finally beaten after the Eddies were down to 10 men; an attempted cross from Johnson deflected off of FCE centre back Watson’s leg. The wicked redirection gave Farago no chance; after stopping shot after shot, Farago was undone by an own goal.

But, we have to take a hard look at the team — which laid an egg after that 0-3-0 road trip, including blowing a 2-1 lead at 10-man Jacksonville.

Yes, Lance Laing was away again on Sunday — this time it was an ankle injury, not international duty. So, the Eddies’ talisman ended up missing about a third of the season. When he was gone, the Eddies won just once. If you pro-rate the Eddies’ record with Laing in the lineup, it’s easily a playoff team. But you can’t simply depend on one player; and his absence doesn’t explain the defensive issues that were evident on the recent road trip or the team’s poor performance against Jacksonville at Clarke Field.

Before the game, Miller said he’s already made up his mind about five players who wouldn’t be back next year. Of course, with the NASL season not yet being over yet (everyone else has another weeks of games), he wouldn’t say who is on the way out. But, if any player outside of Farago was on the bubble on Sunday, he didn’t help his cause.